It's difficult to say exactly when it began.

Records suggest the practice of making poultry-fish feed out of Hazaribagh tannery waste has been going on for over a decade.

On December 30, 2003, The Daily Star reported that the feed, produced by crooked traders in the capital's Hazaribagh, contained chromium, a chemical used in tanning hides.

The toxic feed consumed by fish or poultry enters the food chain and can damage liver and kidney, and cause cancer and other diseases, the report said.

The then state minister for fisheries and livestock, Ukil Abdus Sattar, told this newspaper he was unaware of such activities but he would look into it.

Other officials concerned also admitted their ignorance and said they would take action.

Later, more media reports exposed the extent of feed contamination. The High Court on August 8, 2011, directed the government to stop the use of tannery waste in poultry feed as well as fish meals within 30 days.

Yet the business kept flourishing. About a hundred factories in Hazaribagh now produce feed daily out of some 75 to 200 tonnes of solid waste that includes salt, bone, leather shavings and trimmings.

Though the Rapid Action Battalion or the Department of Environment conducted one or two drives, things have hardly changed.

“I was not aware of the use of tannery waste in fish feed until recently,” fisheries department Director General Syed Arif Azad said, following a report in The Daily Star mid-July this year.

He, however, said that in the last six months, the department tested over 1,200 fish feed samples from across the country and found shortage of protein in some samples.

“Cases take so long … there are also certain procedures, you know,” Arif told this newspaper.

The department also did not test heavy metals in the feed. However, Arif said they would do this now as the reports of animal feed being mixed with tannery-based protein are coming out.

The livestock department, however, filed one case and that is against Amir Multi-protein Ltd in Hazaribagh in March after a Rab-led drive found the factory was operating illegally.

“There is no registered feed mill in Hazaribagh. However, if we have information about anyone manufacturing contaminated poultry feed, we can take action,” said Director General Mozammel Hoque Siddiquee of the livestock department.

After the raid, the livestock department filed a criminal case against three illegal poultry feed factories. 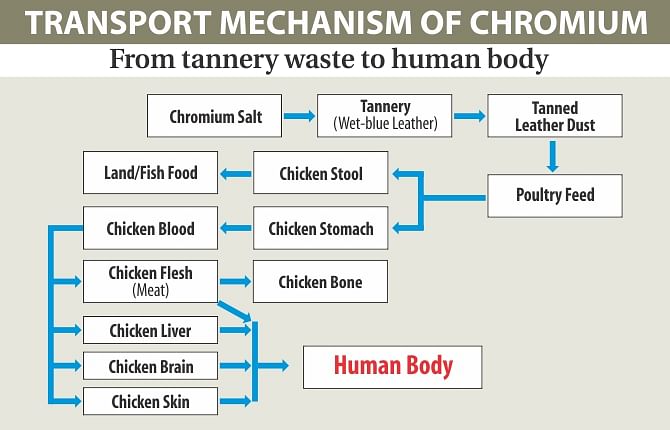 Moshiur Rahman, president of Feed Industries Association of Bangladesh (FIAB), said they had notified the government of the alarming practices in 2007 and several times later.

“There were one or two drives but it took only some days for the illegal factories to restart. Who knows whether they bribe police?”

According to Moshiur, the FIAB members produce around 80 percent of the 30 lakh tonnes of feed a year. The image of the industry is being tarnished for the unscrupulous traders in Hazaribagh.

On February 10, 2011, the then Department of Environment director Munir Chowdhury seized toxic feed in a raid and sued the owners.

The accused were arrested but they came out easily after filing an appeal. “We had to face threats from some quarters. They seemed very powerful,” Munir said when contacted recently.

Some workers engaged in boiling and sun-drying the tannery waste said police take Tk 100-200 for each burner used for boiling the solid waste.

"Whenever a burner is on, one has to bribe the cops," said a tannery worker in Hazaribagh during a recent visit by a reporter from this newspaper.

"There is an association [of feed manufacturers] that pays police on monthly basis. Police become strict whenever there is a mobile court drive but they loosen the grip later," he said.

Police, as usual, deny the allegation.

“We have destroyed toxic feed from some factories. We would not have done it if we had taken bribe from the factories,” said Moinul Islam, officer-in-charge of Hazaribagh Police Station, referring to a July raid in Hazaribagh.

Al Amin, executive magistrate of the Rab, who led a mobile-court drive lately, said, “We can conduct raids. But monitoring these factories is basically the responsibility of livestock and fisheries departments. Without a robust role from them, shady activities at these factories cannot be uprooted.”