Over a dozen harmful ripening agents have flooded the market amid lax government monitoring, and unscrupulous traders and growers are using them on fruits at will, posing a threat to public health. 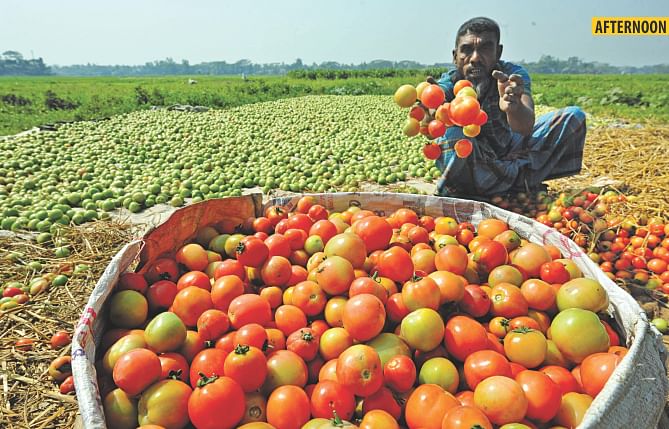 In the afternoon on the same day, the tomatoes had ripened and were being put in baskets for shipment. Photo: File

None of these is legal. In fact, the government has never approved any ripening agent. It only has approved two plant growth regulators (PGRs), hormones that are applied to make fruits grow bigger and look more attractive, said officials in the Department of Agricultural Extension's (DAE) regulatory wing.

The importers of ripening agents dupe the government by saying they are only importing the PGRs.  They get away with this, as the government has no mechanism in place to monitor what is being imported and marketed, said industry insiders.

"I have instructed field inspectors to destroy ripening agents if they find any in shops in their respective areas," said Qudrat-E-Ghani, deputy director (inputs) in the DAE's field service wing.

But the field officers never conduct any such drives, Ghani, who joined the DAE only a few months ago, told The Daily Star.

And this is how the markets are deluged with ripening agents.

Farmers get these chemicals easily from traders and use them excessively on fruits like mangoes, litchis, bananas, pineapples, melons and papayas; vegetables like tomatoes; and cash crops like sugarcane to quicken ripening and increase shelf life of the produce.

Experts say the process of fruit ripening is mainly accelerated by ethylene. The agents available in the market are basically different types of ethylene.

Besides ethylene or ethephon, calcium carbide is also widely used for ripening fruits.

When carbide comes in contact with moisture, it produces acetylene gas. Acetylene acts like ethylene and accelerates the ripening process, but is inadvisable because calcium carbide has carcinogenic (cancer causing) properties.

The use of this chemical for ripening fruits is illegal in most countries.

A study titled "Effects of Using Chemicals and Hormones for Cultivation and Marketing of Vegetables and Bananas", conducted by National Food Policy Capacity Strengthening Programme in 2009, revealed that around 74 percent of banana wholesalers use different types of ripening agents.

A high official of Bangladesh Agricultural Research Council (BARC), however, has a different opinion on this issue.

Manirul Islam, director (nutrition) of the BARC, said ripening hormones were not harmful and that they were legal in many developed countries.

"Basically, the growth hormone and the ripening hormone come from the same chemical, and neither of them is harmful. So I recommend that the government approve both," said Manirul.

If the government approves one, the other one should also get approval, he said.

The ripening agents are banned in India, Pakistan, Malaysia and several other countries, as they are harmful to health, experts said. Besides, the Food and Agriculture Organisation (FAO) grades ethephon as a poison.

However, as per Bangladesh Safe Food Ordinance (Amendment), 2005, not only ripening agents, but production and use of any harmful chemicals, including calcium carbide, formalin and ethephon are prohibited.

Asked how these ripening agents were making their way into the market, the marketing manager of a top pesticide company said the chemicals were mainly imported from India and China, and local companies distributed these across the country.

"The traders know these chemicals are illegal. Still they are marketing these since there is a huge demand. If they don't do it, Indian products will be smuggled in," he said, requesting anonymity.

Sarowar Hossain, a mango grower from Chuadanga, said he had been using ripening agents for the last couple of years.

On a visit to Dhaka, he told The Daily Star, "The government only destroys our produce if we use chemicals, instead of making sure these [ripening agents] never get to the market." 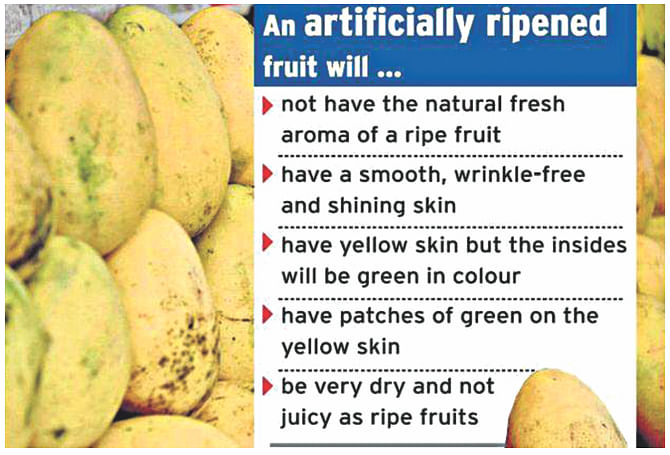 Abul Kalam Azad, deputy director of the department of agriculture, Rajshahi division, said the authorities had advised the mango growers not to use ripening agents, as these were harmful and decreased the nutritional value of fruits. But the farmers paid little heed to their advice.

"Farmers use ethophon in tomatoes to hasten ripening. They are likely to use it when the season of tomatoes starts next November," said Saiful Islam, upazila agricultural officer of Godagari, Rajshahi.

Azad and Saiful are well aware that ripening hormones are illegal but none of them conducted any drives against those, as they were not told to do so.