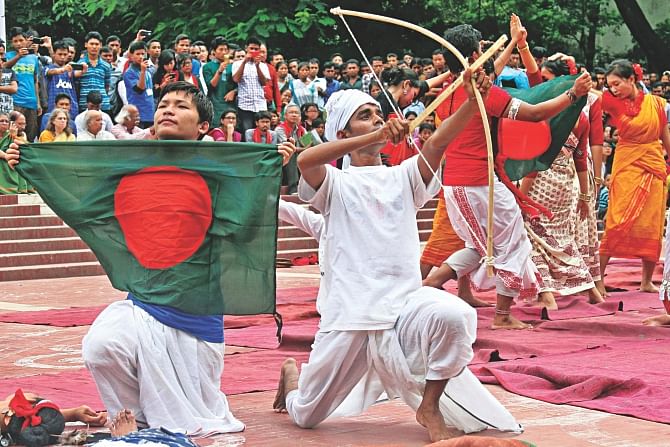 Indigenous people performing at the Central Shaheed Minar yesterday in observance of International Day of the World's Indigenous Peoples. Bangladesh Adivasi Forum organised the event where almost every banner and festoon had the word “adivasi” on it. Photo: Anisur Rahman

"Shame on the state that turned me into a Bangalee! Shame on the state that called me tribal and what not! I say I am Munda, Santal, Lusai, Murong, Khiyang, Chakma, Mandi, Hajong, Marma, Tripura. I am Adivasi [indigenous]."
The above is an extract from the Bangla song with which the celebration of International Day of the World's Indigenous Peoples, organised by Bangladesh Adivasi Forum, kicked off at the Central Shaheed Minar in the capital yesterday.
First declared by the United Nations General Assembly in December 1994, the day was never officially celebrated by the Bangladesh government.
Rather, on Thursday the Press Information Department (PID) issued a release urging the media, experts, university teachers and civil society members to avoid the word 'Adivasi' at discussions and talk shows on the international indigenous peoples' day.
The PID also mentioned in the release that under the 15th amendment of the constitution, indigenous (Adivasi) people would be termed as “small ethnic groups or tribes”.
However, every banner, festoon and speech by civil society members and politicians at the indigenous day celebration used 'Adivasi' to describe the indigenous people, not the terms dictated by the 2011 amendment.
"Who are those intellectuals who say that Bangladesh will face security problems if the term 'Adivasi' is recognised?" asked Mizanur Rahman, chairman of the National Human Rights Commission, in the opening speech of the programme.
The security of a country cannot be ensured through a military equipped with modern arms. It is rather unity among all in a country free from torture and discrimination that can ensure peace and security, he observed.
"Non-recognition of the word 'Adivasi' is an argument of the ignorant," said Rashed Khan Menon, civil aviation and tourism minister.
Menon, who was a member of the constitution amendment committee, had opposed the move regarding non-recognition of indigenous people.
A member of the parliamentary caucus on indigenous people, Menon yesterday expressed his frustration over the insignificant budget that had been allocated this fiscal year for indigenous people living on the plains.
Prof Mesbah Kamal, technical coordinator of the caucus, said Tk 16 crore has been allocated this year for about 20 lakh plainland indigenous people of the country.
Expressing concern over recent incidents of torture on indigenous leaders in the northern region, Mesbah urged everyone to join a conference on plainland indigenous communities on September 1 in Rajshahi.
"Ninety-nine families were evicted and around 250 acres of land belonging to indigenous people were grabbed across the country in the last four months," said Shaheen Anam, executive director of the rights organisation Manusher Jonno Foundation (MJF).
The state, the government and society in general have failed to ensure the safety of indigenous women, who are increasingly falling victim to torture used as a means for grabbing their land.
A two-day long programme, which includes an indigenous fair and seminars on problems faced by indigenous communities, began at the Bangla Academy premises yesterday. The MJF organised the programme to mark International Day of the World's Indigenous Peoples, 2014.
Menon, along with rights activist Sultana Kamal and CHT Regional Council Chairman Jyotirindra Bodhipriya Larma, known as Santu Larma, inaugurated the programme, which was moderated by Shaheen Anam.
Santu Larma thanked MJF for the arrangement and hoped that the NGO would continue its support for the preservation of the unique cultures of the indigenous communities.
Meanwhile, CHT Equal Rights Movement claimed that there was no rationale behind celebrating the day in Bangladesh as there were no indigenous people in the country like the "Red Indians in America and Australia".
The group celebrated 'Upojati-Bangalee Sanghati Dibosh' [Tribal-Bangalee solidarity day] yesterday in Khagrachhari, Rangamati and Bandarban by holding rallies and forming human chain, the civil platform said in a statement.
It claimed Bangalees as the original owners of the land in the hill tracts and all indigenous communities as outsiders. They criticised the media's use of the term 'indigenous' despite government advice.
Referring to the UN convention, which prohibits entry of police and military in indigenous neighbourhoods, the group said that the sovereignty of the state would be at stake if the term 'Adivasi' was allowed to be used.