Picked up, they never return 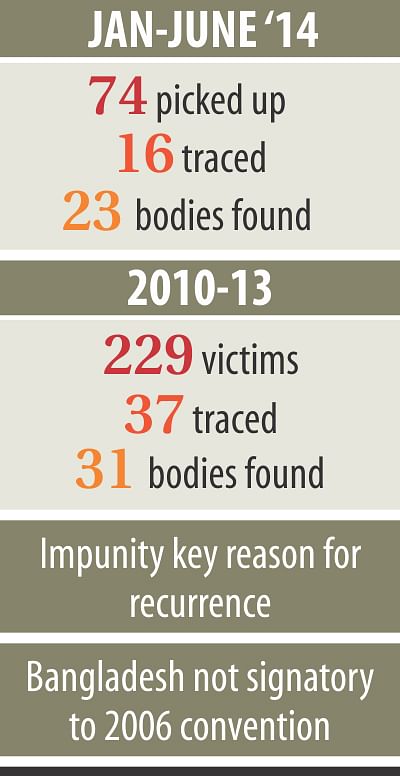 Abdul Quader Bhuiyan Masum always wanted to be an intelligence officer. And everything was going the way he wanted.

A final-year student of the capital's Government Titumir College, Masum was preparing himself for the recruitment test for field officers' posts at National Security Intelligence last year. But on December 4, just nine days before the test was held, he suddenly disappeared and never returned home.

He along with five others was allegedly picked up by law enforcers from the capital. His police record was clean.

Two days later, Masum's father filed a general diary, but the law enforcement agencies have yet to say anything about his fate or whereabouts. The same happened in case of the other five.

"He is the youngest among the five siblings and the most pampered one. My parents have been sick since the day of his disappearance,” said Masum's elder brother Arzu.

The story of Masum's disappearance and ordeals of his family is not an isolated one. According to rights body Ain o Salish Kendra, as many as 229 people allegedly fell victim to forced disappearances between 2010 and 2013.

The Ain o Salish Kendra reports indicate a rising trend of such disappearances in the last five years. Forty-six people were made to disappear in 2010, 59 in 2011, 56 in 2012 and 68 in 2013, while 74 people were abducted allegedly by law enforcers in the first six months of this year.

Amid these upsetting developments, the International Day of the Victims of Enforced Disappearances is being observed today. Since 2011, the day has been observed globally to condemn what the United Nations considers is "a strategy to spread terror in the society".

Of the 74 victims of this year, seven were allegedly abducted and killed by some Rapid Action Battalion personnel in Narayanganj late in April and their bodies were later found floating in a river. The gruesome seven-murder touched off an outcry against enforced disappearances across the country, leading to an unusual move in which three top Rab officials were sacked, sued and put behind bars.

"Though a few of these incidents took place late in December last year, those were reported in the media this year," said ASK Director Nur Khan.

Apart from the seven, bodies of 16 others were found. Though eight victims were released, the whereabouts of 35 are not known yet. One of the abductees was found in an office of the Detective Branch of police while Rab men produced seven others before the media a few days after their disappearance and claimed they were accused in different cases.

Of the 229 victims of the last four years, 159 remain traceless while bodies of 31 were found. Only 20 were released and 17 others were found in police custody or jail afterwards, said the ASK findings prepared on the basis of newspaper reports and their own research. 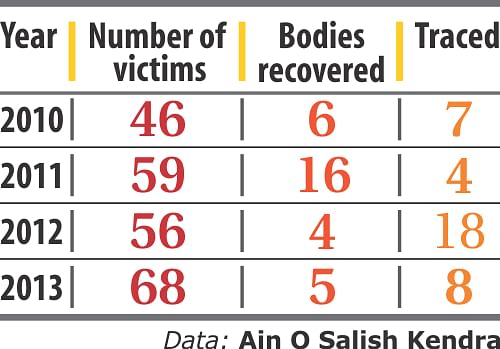 In its Human Rights Violation Report 2013, the ASK said, “Enforced disappearances or abduction by law enforcement personnel dressed in civilian clothes have been reported in the media. Persons are picked up and remain missing for some days [and] subsequently some of their corpses are found but the perpetrators are not identified.”

“The government neither issue press note nor conduct any proper investigation nor has any legal action been taken to hold the perpetrator accountable,” it added.

Human Rights Watch last May urged Bangladesh to form an independent body "to investigate evidence that the paramilitary Rapid Action Battalion (Rab) has been responsible for extrajudicial executions, disappearances, torture, and other serious abuses over many years".

In July, the global rights watchdog wrote to Prime Minister Sheikh Hasina, reiterating its call for disbanding the Rab, which it argued was “beyond reform”.

As to why enforced disappearances take place, jurist Shahdeen Malik said, “Such incidents happen when the rulers think they can rule a country without adhering to the rule of law ... The culture of impunity is the main reason for the continuation of such crimes.”

With the passing of time, the profiles of targets have changed, said Nur Khan.

Once only those who had multiple murder charges against them were targeted, but it became apparent before and after the January 5 national polls that those who believed in a different political ideology too fell victim to such incidences, the ASK director said.

Such a move was apparently a shortcut to curbing corruption and crimes in the society and earn people's trust, Nur Khan commented.

"But you cannot cure a chronic disease using Coramine. You have to ensure a long-term treatment for this."

Citing the examples of El Salvador and Guatemala, Shahdeen Malik said enforced disappearances were rampant in those countries during the '70s, eventually creating a violent society. "But we don't want Bangladesh to turn into a country like any of those."

However, thanks to the International Convention for the Protection of all Persons from Enforced Disappearance, adopted by the UN in 2006, the perpetrators are now being tried. Even the incumbent president and the vice-president of Kenya are facing trials at the International Criminal Court for such crimes, he said.

Though Bangladesh is yet to ratify the convention, cases of enforced disappearance can still be tried under several domestic laws, he added.

He claimed there is no crime named enforced disappearance in the Bangladeshi laws. What happens in Bangladesh is abduction. “It is abduction that we have to deal with.”

Asked whether Bangladesh will sign the UN convention regarding such disappearances, the minister said since enforced disappearance is not mentioned in the country's laws and policies, there can be no question of ratifying the convention.

According to the UN-adopted Declaration on the Protection of All Persons from Enforced Disappearance, an enforced disappearance occurs when:

"persons are arrested, detained or abducted against their will or otherwise deprived of their liberty by officials of different branches or levels of Government, or by organised groups or private individuals acting on behalf of, or with the support, direct or indirect, consent or acquiescence of the Government, followed by a refusal to disclose the fate or whereabouts of the persons concerned or a refusal to acknowledge the deprivation of their liberty, which places such persons outside the protection of the law."