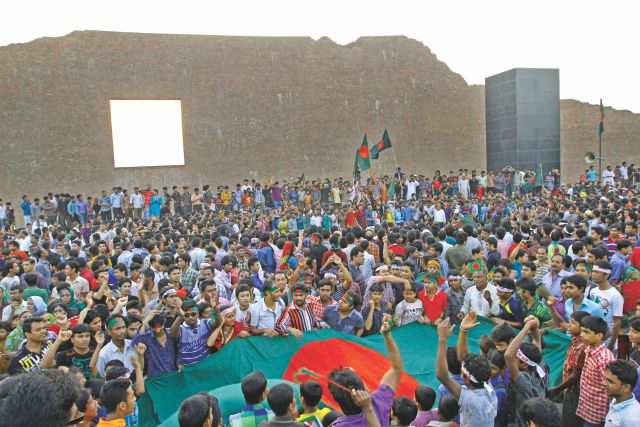 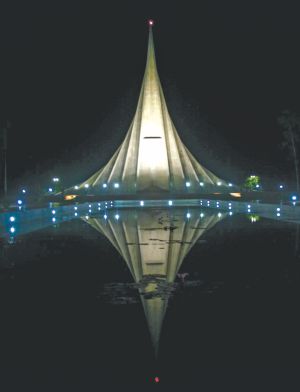 The Parliamentary system was abandoned, and a one-party system introduced, to be followed, not much later, by the discarding of the basic state principles of Bengali nationalism, secularism and socialism. A military dictator found it convenient to write into the constitution the incredible idea of a state religion. Coups and counter-coups occurred. Military rule prevailed for years together. Privatisation of public industries and property was encouraged. A few prospered depriving the rest.  The dominating politics of power degenerated into trading. In a word, the spirit of liberation has been cornered, continually, and politics of power has become the order of the day.
Many of those who believed in the politics of liberation joined the politics of the ruling class, owing to frustration and lack of the courage of ideological conviction. Betrayed by the ruling class, people looked up vaguely to the leftists as they had done in the past. But the failure of the leftists was devastating.  Historically, the leftists were the first to raise the demand for the liberation of Bangladesh, but they were unable to take on the leadership of the war. They were divided. Some of them were unclear about  the socio-economic reality and moved fruitlessly toward extremism, some others preferred to align themselves politically with the liberal bourgeois section the ruling class.  Then there were those who lost heart in the absence of role models. Many of the talented, left-leaning youth went abroad for higher education and did not return. The fact of the matter is that the left parties have not been able to perform what the public had expected of them.
The vacuum was filled in by a section of the Mujib Bahini who, disappointed in their expectation of remaining close to the centre of power, put up an anti-government stance, calling themselves the Jatya Samajtantrik Dal (JSD) and declaring themselves as committed to scientific socialism. As is well-known, the Mujib Bahini was formed as a second line of defense against a possible leftist take-over. Naturally, the JSD could not go far and broke into fragments.
It is from the students that the pro-liberation forces have been substantially drawn. Since the independence of 1971 attempts have been made, systematically and continuously, to depoliticize the students. Elections to students' unions are not being held; and in the absence of elected representatives those who manage to gain access to government power act as student-leaders, engaging themselves in extortion, violence and the like, with encouragement from the ruling class. What passes for student-politics has become hateful to many, and not without reason.
But the struggle for liberation is not a myth, nor has its spirit disappeared. Pro-liberation forces do exist and are active. Although many of those fought in 1971 are no longer with us, it is heartening to notice that a new generation has grown up who had not seen the war but are inclined to the idea of liberation. They are dissatisfied with capitalism and believe, even if vaguely, that the system must be changed. Institutional education has not been promoting the cause of liberation. On the contrary, the three contrary systems of education are widening the class division. Madrasha education has created a large body of unemployed and unemployable youth who are likely to fall easy prey to the political call of the fanatics and peddlers of political Islam. Even among the English-medium students there are some who, disillusioned with capitalism and unable to find a leftist outlet, tend to join the so-called Islamic terrorist outfit.
The February youth uprising, demanding proper punishment for the war criminals, bears testimony, if any be needed, to the fact that despite hindrances, discouragement and diversions, the politics of liberation continues to flow. The message of this youthful and impressive occurrence is clear. The new generation is anti-establishment in outlook; it does not trust the politics of the ruling class. It is prepared to make sacrifices if necessary, and is, at the same time, waiting for a call. The call has to come not from an individual but from a movement. That movement would not be new, it would be a furtherance of the people's continuing struggle for liberation. And there is no reason to doubt that it is on the politics of liberation as distinguished from the politics of power that the future of Bangladesh really depends. Adjustment to the existing system would not do, reforms spoken of by Civil Society and the NGO's would not be enough; a total transformation of the system leading to democratisation of the society and the state would be needed.
That has been our collective dream for ages, and the more we move towards its realization the greater would be reawakening from the slumber of alienation and slough of despair we seem to have fallen into.

The writer is an eminent Litterateur and Professor Emeritus,  University of  Dhaka.