Our language our pride: A wider perspective | The Daily Star
Skip to main content
বাংলা T

Our language our pride: A wider perspective 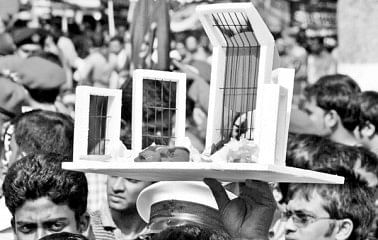 Every year 21st February comes with its own glory and grief that touches every Bengali speaking person especially Bangladeshis as the magic seed was sown six decades ago on this very day to give birth to a new nation, today's Bangladesh. And now, for more than a decade, the whole world celebrates 'Amor Ekushey' with us in the name of International Mother Language Day. That alone should give us a lot of sense of pride to have the recognition of our identity. We have achieved the credit of creating awareness world wide about the importance of maintaining and nurturing language and cultural diversity. In this new world, more humane world, that striving for more equality among people from every corner, it is established that we are many but we are one, we are human being no matter what language or what cultural background an individual possess. So it is important more than ever before, people value their own cultural heritage which is best borne by their local language, in the era of globalisation.
Ekushey is all about Bangla, the right to speak the mother tongue, the right to express oneself in the most comfortable way, the right to practice humanity in its own right. Once Bangla showed the way to stand the ground that is followed by the other nations ever since United Nations declared 21st February as the International Mother Language Day. Its not only celebrated by the expatriate Bangladeshis around the world beyond the mother land but everybody else irrespective of what language the speak plays a role to cherish their own language and cultural diversity. Most of all it gives people around the world a sense of dignity to be proud of their identity.
Long gone are the rememberance days for the shrine of grief that turned into glory to which the inspirational names like Salam, Barkat, Rafique will be enshrined entwining the centre of human rights outside the circle of the country boundary Bangladesh to the whole world. And that is a big thing and that is why we need a wider perspective to make us a better leader. It is about time we emphasize the importance of learning and teaching Bengali properly here and abroad. Outside the fence of Bangladesh Bengali is the 5th most spoken language in England and the 7th most spoken language in the world and that should give enough reason to enhance the education of this glorious language that attracted the literary Nobel Prize, has a vast wealth of literature and culture and most of all the unique language that was powerful enough to create a sovereign country. A much smaller language (by the number of people speaking), say, Dutch is being taught around the world by far more importance than Bengali. Why are we failing? We actually fell into a vicious circle of language barrier and economic importance. To make Bengali important we need to earn the economic importance world wide and almost equally to make our economy important we need to promote Bengali language and culture more than ever before in the wake of globalisation.
While in the globalisation context English is predominantly inevitable we can also seek to stand the ground by the compelling business interactions such as international labour market or the ready made garments market or foreign investment in our soil by the education of Bengali. To be more worker-friendly all the foreign companies depend on our labour need to know some Bengali rather than making the poor skilled labourers learn the foreign language which does not enhance their skill in any way. Rather the companies can learn their language so that these poor people will not be ripped off by the middle man. Same argument can be put forward for many issues to realise that English is important which does not mean Bengali is unimportant. With thousands years of rich culture and literature we could lead the world in some ways while other countries are doing in other ways.
But with great sorrow today we observe a big chunk of our own youngsters has no knowledge or interest in either Ekushey or Bengali just because English can ensure the life prosperity let alone the people from other nations. Our history is inseparable from Ekushey and to understand that the young generation must learn Bengali in proper manner without that they wouldn't know their own background. Knowing own heritage is important as the world is becoming more and more culturally diverse. In the workplace or the surrounding if someone needs to deal with people from different cultural background they need to know their own culture to be aware how people can be different but work together towards a unique goal.
So for everyone in Bangladesh or abroad Bengali remains as important as the mother something we cannot forget, nor we should.

The writer teaches at the University of Melbourne, Australia