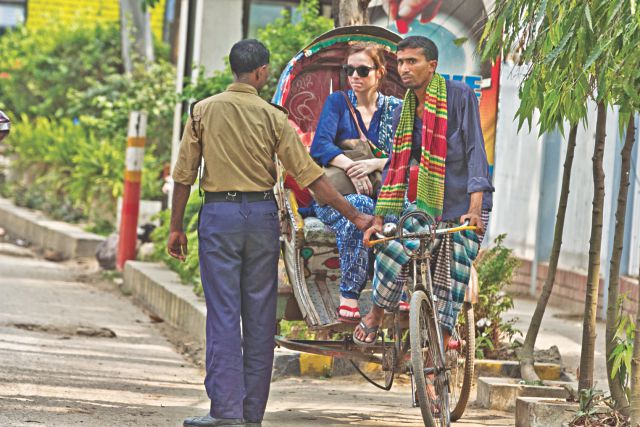 A lungi clad rickshaw-puller stopped at the entry of Baridhara in the capital yesterday. Security workers do not let rickshaw-pullers in lungi into the posh neighbourhood following instructions from the association of Baridhara home owners. Photo: Star

Rickshaw-pullers in traditional Bangalee outfit, lungi, are barred from entering the capital's Baridhara, one of the country's most posh neighbourhoods where diplomats and affluent people live.
Baridhara home owners' association, Baridhara Society, has instructed security personnel not to let in rickshaw-pullers in lungi, requiring them to be in trousers to enter Baridhara, particularly Block K, said security men and local commuters.
As The Daily Star correspondent arrived at the lakeside entry of Baridhara at 11:45am yesterday, he found that the security man on duty Abdul Kader had stopped a rickshaw- puller for wearing lungi and forced the two passengers on board to get down.
One of the passengers, Nasir Uddin Ahmed, who is manager of a private company in Baridhara, said, "Dictating a person's clothing is an infringement upon an individual's personal liberty and right."
Meanwhile, Kader intercepted several more rickshaw-pullers but let in a score of others in lungi, as the passengers defied his instruction.
A good many rickshaw-pullers were found entering the neighbourhood in trousers without facing any hassle.
Talking to The Daily Star, Kader said, "The society issued the instruction about two months back."
The society president Firoz Hasan said, "We just wanted the rickshaw- pullers to put on decent clothes and did not issue any ban on lungi." But barring rickshaw-pullers in lungi might have occurred in one or two cases, he said. "We will look into it."
Adilur Rahman Khan, secretary of the rights group Odhikar, said such restrictions amount to a violation of cultural, constitutional and human rights of an individual.
There are nearly 500 houses of which around 130 are occupied by diplomatic missions in Baridhara K Block between Progoti Sarani and Baridhara Lake, with Kalachandpur to the north and Mariam Tower to the south.