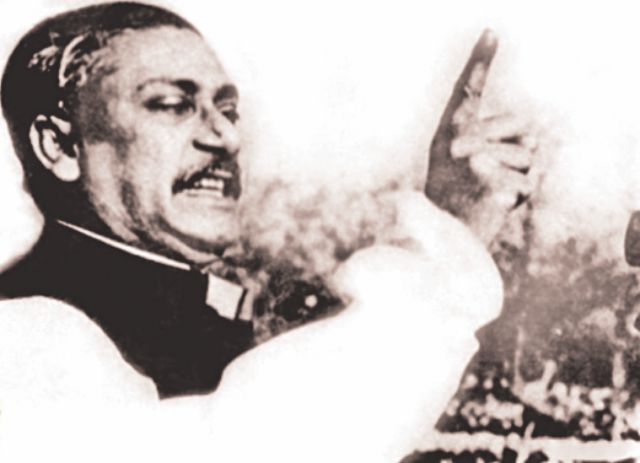 It was his finest hour. It was the afternoon of 7 March 1971. It was but the beginning of what would turn out to be a twilight struggle for national self-expression, for eventual liberation from colonial rule. It was the weight of the world Bangabandhu Sheikh Mujibur Rahman, undisputed leader of the Bangalee nation, chief of the Awami League and majority leader in the newly elected Pakistan national assembly, carried on his shoulders as he stepped up to the dais at the Race Course (today's Suhrawardy Udyan), ready to sketch his guidelines for his people to follow in the developing confrontation with the civil-military-political combine of West Pakistan.
There were many who expected Bangabandhu to go for a unilateral declaration of independence for Bangladesh. There were others who waited to see what his political wisdom, garnered over years of experience, would bring forth for the seventy five million people of what was yet a province of the state of Pakistan. In the event, Sheikh Mujibur Rahman demonstrated his mettle in no uncertain terms. He would not go for UDI, for that would leave him open to charges of political adventurism. And he would not, under any circumstances, give Pakistan's ruling classes any reason to think that he was about to come round to their expectations of a compromise he would agree to. Most significantly, he would let his people know that sovereignty was the goal, but it would be sovereignty arrived at on strong constitutional foundations. If constitutionalism did not work, the nation would find other, necessarily radical means to wage its war for freedom.
The oratory was superb. His opening words were a sign of the burden of responsibility he carried:
“My brothers, I come before you today with a heavy heart.
All of you know hard we have tried. But it is a matter of sadness that the streets of Dhaka, Chittagong, Khulna, Rangpur and Rajshahi are today being spattered with the blood of my brothers . . .
… With great sadness in my heart, I look back on the past twenty three years of our history and see nothing but a history of the shedding of the blood of the Bangalee people. Ours has been a history of continual sadness, repeated bloodshed and innocent tears.”
It was a tale of exploitation Bangabandhu related to that million-strong crowd on the day. And yet there was the conciliatory in his approach to the state of Pakistan:
“I even went to the extent of saying that we, despite our majority, would still listen to any sound ideas from the minority, even if it were a lone voice. I committed myself to supporting any measure that would lead to the restoration of a constitutional government.”
Mujib listed the meetings he had thus far had with politicians from West Pakistan and then moved to matter of the sudden postponement of the national assembly session on 1 March and Yahya Khan's invitation to him to join a round table conference in Rawalpindi on March 10:
“Now Yahya Khan says that I had agreed to a round table conference on the 10th. I had said, 'Mr. Yahya Khan, you are the president of this country. Come to Dhaka, come and see how our poor Bangalee people have been mown down by your bullets, how the laps of our mothers and sisters have been robbed and left empty and bereft of children, how my helpless people have been slaughtered'.
Earlier, I had told him there could be no round table conference. What round table conference? Whose round table conference?  Mujibur Rahman cannot step on the blood of the martyrs and join a round table conference.”
The oratory reaches a crescendo. He tells the junta in no ambiguous terms:
“You have called the national assembly into session, but you must first agree to meet my demands. Martial law must be withdrawn; all soldiers must go back to the barracks; an inquiry into the killings must be initiated; and, power must be transferred to the elected representatives of the people.
Only then can we consider if we can or cannot join the round table conference.”
Bangabandhu then proceeded to outline a series of steps as part of his non-violent non-cooperation movement, warning the Bangalees that they needed to be on alert against the enemy:
“I call upon you to turn every home into a fortress against their onslaught. Use whatever means you have to confront the enemy . . . Even if I am not around to give you directives, I ask you to continue your movement in a ceaseless manner.”
And then came the decisive moment, the words that defined the road to the future:
“Since we have given blood, we will give more of it. Insha'Allah, we will free the people of this land.
The struggle this time is for emancipation. The struggle this time is for independence.
Joy Bangla!”