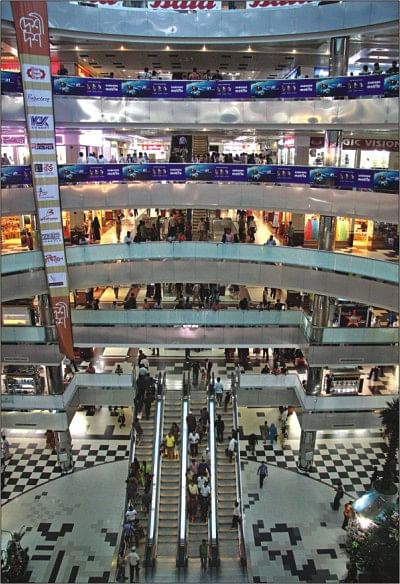 Mushrooming malls in Dhaka fail to attract a sizeable turnout of real shoppers, resulting in a glum turnover in business. Photo: Shafiqul Alam

Mushrooming shopping malls in Dhaka cast a pall of gloom on those who have already put investment at stake by buying or renting showrooms. The dream of high returns is far off.
Reality points to slack sales at many shopping centres around the capital.
Stakeholders said the majority of the shops suffer from low rates of return. Many more are awash in red ink.
Several established shopping malls in the city are experiencing dropping sales while newcomers are not able to attract customers.
The number of real shoppers is low compared to a growing number of shopping malls. Mall visitors are now dispersed across a wide range of options.
The surge in retail outlet space in the more than 100 multistorey shopping complexes in Dhaka is good news for shoppers, as their choices span out, but it is bad news for showroom space owners and renters.
“I'm in dire straits now as I am yet to rent out my showroom,” said Kohinoor Chowdhry, who bought a 100-square feet shop at the "mall of South Asia -- Bashundhara City", which opened nearly five years ago. "When I first purchased the outlet, I planned to sell at a higher price. But that remains a dream."
Like many other retail space owners, Kohinoor blames the location of her showroom for failure to attract potential shop operators. However, the turnout of visitors at the mall, with an eight-storey glass-domed atrium, is impressive.
Shoppers prefer not to maze into the various lanes at the mall. They enter the shops within clear view and complete their shopping needs.
“The majority of the visitors are not necessarily shoppers. But shop owners are optimistic nonetheless," said Khalilur Rahman, owner of a shop at Bashundhara City.
“The situation is improving. I believe the mall will have a good number of shoppers in the days to come,” said Kartick Karmakar, owner of Satarupa Jewellers.
But MBH Shamim, owner of a shop at Dr. Refatulla Happy Arcade on Mirpur Road, is not that hopeful. He paid Tk 29 lakh for possession, but it is difficult for him to find an occupant, who was willing to pay his expected rent.
He not only had to return almost all the security money he received from the tenant, but also had to slash monthly rent by more than half.
“When I first bought the showroom, I expected great demand as there were no modern shopping centres near New Market. But that was not the case," Shamim said. "I do not know when I will be able to recover my investment. The other shopping centres on Mirpur Road are more or less in the same position."
Kohinoor and Shamim represent hundreds of shop owners in more than 100 shopping complexes around Dhaka. Inspired by the success of some pioneering modern shopping complexes, like Eastern Plaza, the trend to invest in this sector gained pace in early 2000, to the merit of real estate developers.
Promises of hefty returns were rosy. Both experienced and novice retailers had gushed in with their savings to buy a piece of the hot pie, either to run on their own or rent out.
Shoppers are overwhelmed by the rising number of shopping centres and choose to shop near their residents.
Sales are dull in most centres and poor management and unavailability of facilities, like proper restrooms, parking, and working lifts, are somewhat to blame, said shop operators.
“The growing number of shoppers is not keeping pace with the growing number of shopping centres. This is the main reason behind low turnout of shoppers,” said Md Selim, president of Eastern Plaza Shop Owners Cooperative Society.
The blow is the most painful to small investors who bet all their fortunes on a single shopping complex. But the situation is relatively better for shop owners and operators, who run shops at more than one shopping complex.
Mohammad Farhaduzzaman, marketing manger of Eastern Housing Ltd, said many shopping complexes have not been developed in a planned manner. This has a discouraging effect on potential shoppers entering the markets.
Md Helal Uddin, president of Dhaka Mahanagar Dokan Malik Samity, said the growth of shopping complexes was unorganised. "It has caused serious havoc. Now crores of money is stuck in these markets."
[email protected]