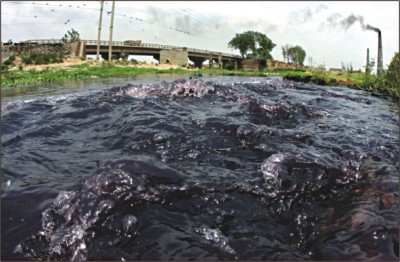 Waste from Bscic Industrial Area in Gazipur ends up in the Baimail Jheel and then flows into the Turag turning water of both into an obnoxious deep purple liquid. The photo was taken at Baimail Jheel.Photo: SK Enamul Haq

Indiscriminate discharge of liquid waste by the industries in and around Konabari industrial zone has ruined a large part of the Turag river and Baimail Jheel, causing immense suffering to residents living on the banks.
Industrial liquid waste and black smog created by brick kilns have doubled the sufferings and even compelled many to move their houses.
Locals say brick kilns have left their fruit trees unproductive, while industrial waste exterminated fish in the river and nearby water bodies, increased mosquitoes, and made croplands infertile.
The government established the Konabari Bangladesh Small and Cottage Industries Corporation (Bscic) industrial area in early 1980s to promote and expand small and cottage industries. Since then the industries are polluting surrounding environment despite getting different facility packages from the government.
Recently, the Bscic authorities have made a list of 152 polluter industries that include 56 dyeing and textile industries, 50 chemicals and pharmaceuticals, nine food processing and 37 other engineering industries. None of these industries has installed an effluent treatment plant (ETP).
"We have been corresponding with the industrialists for last three years about ETP but all in vain," says a Bscic official asking not to be named.
The Bscic provided the industrialists with land in a subsidised price along with many other facilities. But most of the industries are paying back by indiscriminately polluting the environment.
Since the beginning the government was providing tax holiday for five years and no import duty and VAT for capital machinery for these polluters.
Stinky blackish water was seen flowing in the Turag as liquid waste falls in the river directly from the industries.
Massive suffering of the people was witnessed during visits to the surrounding villages including Baimail, Kodda, Kashimpur and Konabari. Besides industrial waste, dust from the brick kilns around adds to the suffering of the local inhabitants.
"We cannot use the river water in any way. Even we cannot take a bath there. Besides, dust from the brick kilns is also causing much suffering to us," says Bayezid Hossain from Baimail village.
"At least 20 of our neighbours have left the village and settled in Gazipur town or nearby areas due to this environmental pollution," he adds.
While describing his childhood memories, Uday Sarkar of the area said, "Just 12 years ago the Turag and Baimail Jheel had a variety of fish. Now no fish can survive there.
"The industry waste has spoiled everything. We cannot afford moving from our village, so we are living here and suffering," he said.
Villagers from Kashimpur say it is a big problem for them to collect water from tube-wells for bathing, washing and drinking.
"For the last few years we are not getting fruits from coconut, banana, mango and some other trees," said Shamsur Rahman from Majlishpur.
"If I wash my hand in the river waters, it stinks like kerosene," says a villager. He adds their corrugated tin-made houses are being damaged within two to three years these days thanks to the dust from brick kilns.