Now hip-hop, too, is made in China | The Daily Star
Skip to main content
বাংলা T

Now hip-hop, too, is made in China 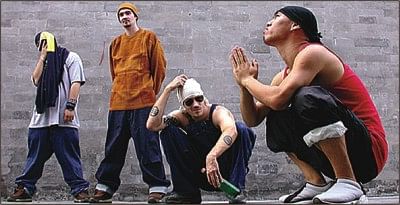 The rap group Yin Ts’ang, made up of a Beijinger, a Chinese-Canadian and two Americans. The name means “hidden.”

Yesterday more than half a billion people in China were expected to watch the annual Chinese Lunar New Year gala. Organised by the state-owned China Central Television, the marathon event showcases the country's musical diversity with an extensive line-up of Chinese pop stars performing hit songs. But one genre audiences are unlikely to see is Chinese hip-hop, despite its growing popularity among the country's urban youth.
Over the last decade many students and working-class Chinese have been writing rap as a form of self-expression. Rougher and more rebellious than the well-scrubbed pop that floods the airwaves in the country, this kind of hip-hop is not sanctioned by broadcast media producers or state censors but has managed to attract a grass-roots fan base.
“Hip-hop is free, like rock 'n' roll -- we can talk about our lives, what we're thinking about, what we feel,” said Wang Liang, 25, a popular hip-hop DJ in China who is known as 'Wordy'. “The Chinese education system doesn't encourage you to express your own character. They feed you stale rules developed from books passed down over thousands of years. There's not much opportunity for personal expression or thought; difference is discouraged.”
While American rappers like Eminem and Q-Tip have been popular in China since the 1990s, homegrown rap didn't start gaining momentum until a decade later. The group Yin Ts'ang (its name means “hidden”), one of the pioneers of Chinese rap, is made up of global nomads: a Beijinger, a Chinese-Canadian and two Americans.
“The big change was when rappers started writing verse in Chinese, so people could understand,” said Zhong Cheng, 27, a member of the group who was raised in Canada but born in Beijing, where he returned in 1997. “Before that, kids listened to hip-hop in English but maybe less than 1 percent could actually begin to understand.”
Yin Ts'ang's first hit was “In Beijing,” from the band's 2003 debut album, “Serve the People” (Scream Records); the title is a twist on an old political slogan. It sets a melody played on a thousand-year-old Chinese fiddle called the 'Erhu' against a hip-hop beat that brings Run D.M.C. to mind. The song, an insider's look at Beijing's sights and sounds, took the underground music scene by storm, finding its way into karaoke parlours, the Internet and even the playlist of a radio station in Beijing.
“There's a lot of cats that can rap back home,” said Jeremy Johnston, a member of the group and the son of a United States Air Force captain. “But there's not a lot of cats that can rap in Chinese.” Johnston, 33, moved to Beijing in the late '90s because, he said, it was “the thing nobody else was doing.”
Since “In Beijing,” the Chinese hip-hop scene has quickly grown. Hiphop.cn, a Web site listing events and links to songs, started with just a few hundred members in 2007; in 2008 it received millions of views, according to one of the site's directors.
Dozens of hip-hop clubs have opened up in cities across the country, and thousands of raps and music videos by Chinese MC's are spreading over the Internet. But making Chinese hip-hop is still a relatively profitless -- and often subversive -- activity. Some Chinese rappers address what they see as the country's most glaring injustices. As Wong Li, a 24-year-old from Dongbei, says in one of his freestyle raps:
“Don’t you know China is only a heaven for rich old men
You know this world is full of corruption
Babies die from drinking milk..."
Wong, who became interested in hip-hop when he heard Public Enemy in the mid-'90s, said rapping helps him deal with bitterness that comes with realising he is one of the millions left out of China's economic boom.
“All people care about is money,” he said. “If you don't have money, you're treated like garbage. And if you're not local to the city you live in, people discriminate against you; they give you the worst jobs to do.”
While Beijing's underground music scene is generally under the authorities' radar -- hip-hop, indie rock and reggae groups perform regularly at nightclubs -- the producers representing broadcast media in China avoid musicians perceived as threatening.
“There are pockets of freedom here,” said Wong Miao, 24, the director of Acupuncture Records, which doubles as a collective of D.J.'s. “Anyone can play what they want in clubs, and as long as you aren't insulting the party, generally you'll be left alone. But if you want to take the next step to becoming mainstream, you hit a wall. If you aren't singing their type of stuff or aren't incredibly rich, they won't sign you.”
After seven years together, Zhong and Johnston of Yin Ts'ang still struggle to pay the bills, but they haven't stopped making hip-hop, which they now do under their own independent label, YinEnt.