Ex-NSI chief in the dock 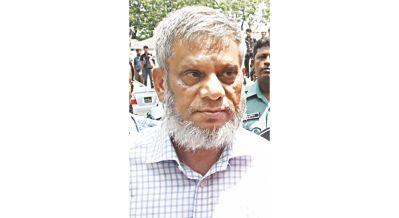 A few days before the August 21 grenade attack on an Awami League rally, the then NSI boss Abdur Rahim visited Hawa Bhaban, the alterative powerhouse of the previous BNP-led government, while he was receiving treatment in a military hospital in Dhaka.
Yousuf Hossain, a National Security Intelligence (NSI) official, yesterday said this in his testimony to a Dhaka court as a prosecution witness against his former boss Brig Gen (retired)
Rahim in two cases filed in connection with the grenade attack.
Rahim, who stood in the dock during the testimony, looked angrily at Yousuf.
Rahim was the NSI director general when the grenade attack was made on an AL rally on August 21, 2004 to assassinate Sheikh Hasina, the then leader of the opposition. Yousuf, who was a field officer of NSI, is now an assistant director of the organisation.
Rahim had been admitted to the Combined Military Hospital (CMH) in Dhaka cantonment with piles on August 12, nine days before the grenade attack. And Yousuf was one of the three NSI officials responsible for taking care of their boss by turns.
"The DG sir [Abdur Rahim] went to Hawa Bhaban a day between August 12 and 21 in 2004 while receiving treatment at the Combined Military Hospital," said Yousuf in his deposition as the 66th prosecution witness of the cases before Dhaka Speedy Trial Tribunal.
The then NSI chief returned to the hospital from Hawa Bhaban and received treatment there till August 25.
Soon after the grenade attack on an AL rally at Bangabandhu Avenue, Yousuf learnt about it over his walkie-talkie.
He was told that AL leader Ivy Rahman and many other activists were killed in the attack. Yousuf then conveyed the message to then NSI chief Rahim.
"DG sir then asked me who were the other leaders that got killed?" Yousuf told the court.
When Yousuf informed his boss about the attack, Rahim specifically wanted to know what happened to Sheikh Hasina, the NSI official said at the court.
In reply, Yousuf told him that Hasina narrowly escaped death, but she sustained injuries to her left ear.
A few hours later, at around 7:00pm, two journalists went to Rahim's cabin in the hospital. The then director of Directorate General of Forces Intelligence (DGFI) Brig Gen Rezzakul Haider Chowdhury was also in the cabin at that time, said Yousuf who was outside Rahim's cabin.
Yousuf said the two journalists left Rahim's cabin after 15 minutes.
"When they [two journalists] were coming out of the cabin, I heard them discussing that the grenade attack had been carried out following a feud between Sheikh Hasina and Sheikh Selim, and such news would not be acceptable to public at all," said Yousuf.
After an hour, Rezzakul left the cabin, said Yousuf.
The NSI official told the court that he took care of Rahim for three more days after the August 21 attack.
Judge Shahed Nuruddin recorded Yousuf's statement and fixed today for his cross-examination by defence.
Twenty-four people, including Ivy Rahman, wife of President Zillur Rahman, were killed and hundreds of party activists and leaders were injured in the grenade attack at Bangabandhu Avenue on August 21, 2004.
Two cases -- one under the explosive substances act and the other for killing -- were filed in connection with the incident.