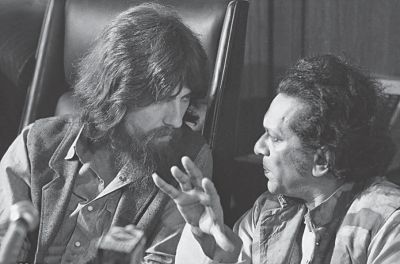 Indian iconic sitar maestro Pandit Ravi Shankar, who led worldwide spread of Indian music, died early yesterday in San Diego of United States.
He was 92.
Shankar, who was unwell for the last several years, underwent a surgery on December 7 at the Scripps Memorial Hospital in La Jolla, California where he breathed his last.
The composer was admitted to the hospital last week following complaints of breathlessness.
"It is with heavy hearts we write to inform you that Pandit Ravi Shankar, husband, father, and musical soul, passed away today," the sitar maestro's wife and daughter, Sukanya and Anoushka Shankar Wright, said in a joint statement yesterday.
Indian Prime Minister Manmohan Singh paid rich tributes to Shankar, saying the "unsurpassable genius" was the country's one of the "most effective cultural ambassadors across the world".
"An era has passed away with Pandit Ravi Shankar. The nation joins me to pay tributes to his unsurpassable genius, his art and his humility," Manmohan said.
He wrote a letter to the music icon's wife Sukanya, saying he joins the family in grieving the loss and extended his heartfelt condolences, reports our New Delhi correspondent.
In separate condolence messages, Bangladesh President Zillur Rahman and Prime Minister Sheikh Hasina expressed their profound shock at the death of the sitar maestro.
Recalling the contributions of Shankar during the Liberation War of Bangladesh, Zillur said with his death, Bangladesh has lost a tested friend, reports UNB.
"The demise of Pandit Ravi Shankar is an irreparable loss to the music arena of the subcontinent," Hasina said.
Shankar pioneered the concept of the rock benefit with the 1971 Concert For Bangladesh at Madison Square Garden in New York along with American singer-guitarist George Harrison.
â€œIn one day, the whole world knew the name of Bangladesh,â€ Shankar said in a book â€œGeorge Harrison: Living in the Material World.â€
â€œIt was a fantastic occasion and I think it was the first of its kind. Now, of course, wonderful things are done, so many musicians are raising money for different causes. But the Bangladesh concert, I think, was the very first oneâ€, the sitar wizard added.
Shankar was a Rajya Sabha member from 1986 to 1992.
A recipient of India's highest civilian honour Bharat Ratna in 1996, Shankar lived in both India and the US.
He is survived by his wife, two daughters, three grandchildren and four great-grandchildren.
"As you all know, his health has been fragile for the past several years and on Thursday he underwent a surgery that could have potentially given him a new lease of life.
"Unfortunately, despite the best efforts of the surgeons and doctors taking care of him, his body was not able to withstand the strain of the surgery. We were at his side when he passed away," the joint statement of Shankar's wife and daughter said.
A three-time Grammy award winner, Shankar had last performed in California on November 4 along with his daughter Anoushka.
Both the father and the daughter were pitted against each other in the race for the same award next year.
A Bengali Brahmin, Pandit Ravi Shankar whose full name was Rabindra Shankar Chowdhury was born on April 7, 1920 in Varanasi, India.
Shankar's father, born in what is now Bangladesh, was a government official, a lawyer, an amateur musician. Before Shankar's birth, Shyam Shankar left his wife to practise law in Kolkata and London.
The youngest of four brothers, he spent his first 10 years in relative poverty and was brought up by his mother.
He was almost eight before he met his absent father, former minister to the Maharajah of Jhalawar.
In 1930, Shankar's eldest brother Uday Shankar shifted the family to Paris and over the next eight years the sitar player enjoyed the limelight in Uday's dance troupe which toured the world introducing Europeans and Americans to Indian classical and folk dance.
Through his influence on his great friend George Harrison, and appearances at the Monterey and Woodstock festivals and the Concert for Bangladesh at Madison Square Garden, Shankar became a household name in the West, the first Indian musician to do so.
The sitar maestro has composed music for several films including Satyajit Ray's Apu trilogy â€œPather Panchaliâ€, â€œAparajitoâ€ and â€œApur Sansarâ€ as also â€œParas Patharâ€, â€œDebiâ€ and â€œJalsagharâ€.
Shankar learned the sitar with Ustad Allauddin Khan, a musician who had previously toured with the troupe. He began playing the instrument publicly in 1939 and stayed with Khan for six years.