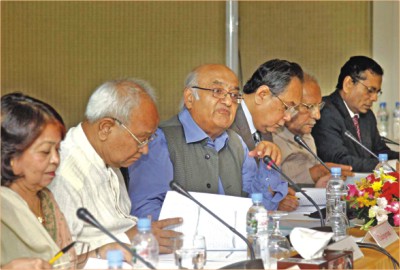 Prof Rehman Sobhan, third from left, speaks at a dialogue on "The Parliament of Bangladesh: Representation and Accountability" at Brac Centre Inn auditorium in the city yesterday. On his right are Deputy Speaker Shawkat Ali and Prof Rounaq Jahan and on his left are Anisul Islam Mahmud, MK Anwar and Mustafizur Rahman. Photo: STAR

Political parties' tendency of not showing due respect to constitutional institutions -- parliament, Election Commission, and the judiciary -- is the key reason for dysfunction in Bangladesh's parliamentary democracy, said lawmakers and civil society members yesterday.
At a dialogue, they also said confrontational politics and the resultant political unrest prompt the opposition to continually boycott parliament, which has kept the House dysfunctional for years.
The Centre for Policy Dialogue (CPD), a civil society think tank, in association with Chr Michelsen Institute (CMI) organised the dialogue titled "National Parliament of Bangladesh: Representation and Accountability" at Brac Centre Inn auditorium in the capital.
At the beginning of the programme, Prof Rounaq Jahan, a distinguished fellow of CPD, and Dr Inge Amundsen, senior researcher of CMI, jointly presented a keynote paper focusing on the unpleasant state of politics in Bangladesh, and on the roles of lawmakers and political parties.
They made a number of suggestions for improving the situation, which included -- holding of free, fair and credible elections, political dialogue among parties, transparency and accountability in expenditure of development funds, access to information, representation of women and minorities in the parliament, and amendment of article 70 in the constitution so lawmakers may exercise freedom of speech in the parliament and may also go against party lines if necessary.
CPD Chairman Prof Rehman Sobhan presided over the event.
Deputy Speaker of the Parliament Shawkat Ali said nowadays debates rarely take place in the parliament. In a democracy, an issue should be discussed in the parliament first, before it is discussed outside, but in Bangladesh the opposite happens, he added.
He claimed that members of the parliament in many cases do not follow the rules of the House, and bring issues from outside while talking on points of order.
Acknowledging that the present parliament is not functional due to continuous boycott of it by the opposition, ruling Awami League leader Suranjit Sengupta said corruption and lack of accountability in different sectors are the major reasons why democracy could not secure its due position in the country in the last 20 years.
Commenting on the ongoing conflict between the opposition and the government over the caretaker government system, he said, "I admit that the country and the nation are now in a crisis, but it can be overcome through dialogue."
BNP Standing Committee Member MK Anwar said personal attacks, hurling of expletives, false statements against opposition lawmakers by the ruling party, and limited scope for opposition lawmakers to deliver speeches in the House are the leading reasons for them to boycott the parliament.
Anwar also said not much has changed since the governing system in Bangladesh switched to parliamentary democracy from the presidential model 20 years back.
Jatiya Party lawmaker Anisul Islam Mahmud said the current conflict over the caretaker government system between the government and the opposition is the result of the Supreme Court's verdict in which it said the caretaker system is unconstitutional but the next two elections can be held under that system. The duality of the verdict sparked the confrontation, he said.
Prof MM Akash of Dhaka University said once a political leader in Bangladesh is elected a member of the parliament, he or she starts collecting fund for the next election's campaign.
Former adviser to a caretaker government M Hafizuddin Khan said there is a practice of walkout from the parliament in many countries of the world, but total boycott of the parliament only exists in Bangladesh.
Prof Asif Nazrul of Dhaka University said the opposition boycotts the parliament because its chief is advised by some senior leaders that if they join the parliament that will legitimise the ruling government.
Lawmaker Tarana Halim said it is very important to have democracy within political parties. If a lawmaker wanted to practice freedom of speech in the parliament then he or she would be in big trouble, lamented Tarana.
Several speakers, however, praised the 45 parliamentary standing committees for their work.