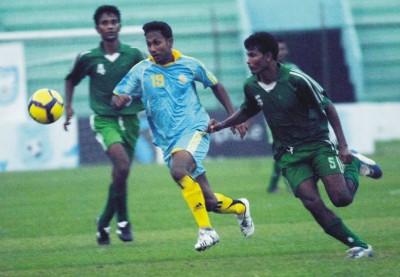 Chittagong Abahani's Rubel Miah (C) is in a hot pursuit to win the ball ahead of a Bangladesh Police defender during the opening match of the 23rd Grameenphone Federation Cup at the Birshreshtha Mostafa Kamal Stadium in Kamalapur yesterday. Abahani won 2-1.Photo: STAR

Chittagong Abahani beat Bangladesh Police by the odd goal in three in the opening match of the 23rd Grameenphone Federation Cup football tournament at the Birshreshtha Mostafa Kamal Stadium in Kamalapur yesterday.
Dhiman Borua opened the scoring in the 15th minute for the Sky Blues before substitute Arafat made it 2-0 on the hour mark.
Bangladesh Police captain Mafizul Rahman scored a consolation goal from a penalty just before the final whistle.
Earlier, Bangladesh Football Federation senior vice president Abdus Salam Murshedy formally opened the meet as chief guest. Kazi Nabil Ahmed, vice president of BFF and Syed Tahmid Azizul Haque, head of market communications of sponsors Grameenphone, were also present.
The opening match of the first round of the traditional season's curtain raiser was a relatively sedate affair. Even though the gallery entry was made free, there were only a handful of spectators to watch the match, which was mostly a drab affair with the goals providing the few moments of excitement.
Dhiman's opening goal was a cool finish as he dabbed the ball into the net after receiving a cross from captain Masud Alam. Masud was also the provider of the second goal, as his corner was headed in by substitute Arafat.