Two cases filed, none yet to be arrested
Anwar Ali from Naogaon 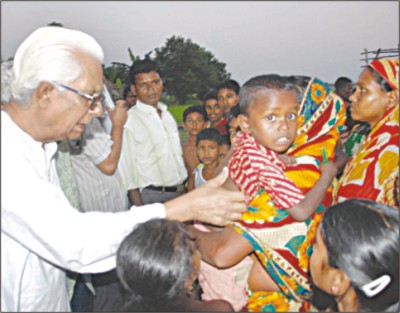 Pankaj Bhattachariya visits the child who was threw off during the attack on indigenous people at Nakhoil Boarambari village in Niamatpur upazila of Naogaon.Photo: STAR

Almost 47 families, mostly indigenous, could hardly forget the indiscriminate attack by a group of people on them to grab the victim's land at Nakhoil Boarambari village in Niamatpur upazila of Naogaon on September 23.
Though two cases were filed with Niamatpur Police Station in this connection, none was arrested as of yesterday. Rather, the "land grabbers" are now threatening them, alleged the families.
Shariful, the alleged "Land grabber", along with his 60 men equipped with sticks, spears (locally known as ballam), and machetes attacked the houses of the families at dawn on the day, said local people.
The attackers broke open the doors of their thatched houses and beat them up indiscriminately with spears and other sharp weapons, leaving five men and four women injured.
They dragged Ruhel Hembrom, a three-year-old son of Biswanatha Hembrom, out of the room with holding his legs and circling him around over the head and threw out the child on the ground.
The injured victims are Biswanath Hembrom, Laxmiram Murmu, Lobin Mardi, Molin, Sumon Murmu, Mainu Mardi, Probhati Mardi, Digi Mardi and Arati.
While visiting the area, the villagers expressed deep concern over lack of security and shelters as the attackers are still moving around area with issuing threats to the
victims.
Local people said five indigenous men -- Laxmiram Murmu, Marang Hembrom, Noksha Murmu, Toro Murmu and Lobin Mardi -- inherited a piece of 72 bighas of land.
As they went to India during the War of Liberation, they could not establish their rights on the land after returning home.
As situation improved after the present government assumed power, some 38 indigenous and nine Muslim families started living on the land setting up straw houses.
The "land grabbers" first attacked them on July 12 this year and damaged their houses. Failing to capture the land, the grabbers again attacked on them on September 23 morning, said the victims.
The affected families had a little food until some political leaders and indigenous leaders visited the spot and distributed some relief materials, including rice, pulse, salt, clothes and medicine.
Pankaj Bhattachariya, presidium member of Gono Forum, Shakti Pada Tripura, organising secretary of Bangladesh Indigenous Peoples Forum, advocate M Shah Alam, an investigator of Ain O Shalish Kendra, Dipayan Khisha, vice chairman of Kapaeeng Foundation, Rabindranath Soren, Amin Kujur and Sabin Munda of Jatiya Adivasi Parishad visited the scene yesterday.
They demanded arrest of the attackers and establishment of the land rights of the indigenous people immediately.
Contacted, Shariful claimed they purchased the land from one Kashimuddin in 1952 and they went there on the day to recover it.
Officer-in-Charge of the police station Shahid Suhrawardy told The Daily Star that they could not arrest the attackers as they went into hiding after the incident.