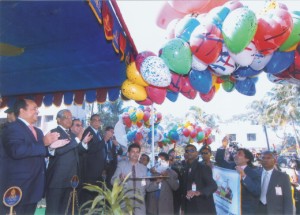 Chief Adviser Fakhruddin Ahmed yesterday urged the youths of Saarc countries to actively participate in nation-building and regional development activities, saying their determination to bring changes in society constitutes the most vital ingredients for progress of the countries.
“On our part we remain committed to building partnership with you in activities relevant for our progress. Your passion for change and resolve to lead a life of significance would enable us to turn challenges into opportunities,” Fakhruddin told the young men and women taking part in the first-ever Saarc Youth Camp.
Fakhruddin declared 'First Saarc Youth Camp 2007' open at National Youth Centre in Savar on the outskirts of Dhaka.
He released colorful balloons and pigeons in the air marking the inaugural of the four-day youth camp.
The main theme of the first Saarc Youth Camp 2007 is 'Connecting South Asian Youths.' The camp arranged in a bid to increase communication, cooperation and fraternity among the youths of the member countries.
It also aimed at creating an opportunity for exchange of experiences and cultures, strengthening friendly relations and developing leadership among the youths of the region.
Around 120 youths are participating in the camp.
Foreign Affairs Adviser Ifthekhar Ahmed Chowdhury, youth participants Saugat Das from India and Nazmus Sadat from the host country, Youth and Sports Secretary Dr Golam Mostafa Talukder and chairman of the National Organising Committee of Saarc Youth Camp
2007 and DG of Department of Youth Development Ismail Hossain also spoke at the function.
Youth and Sports Adviser Tapan Chowdhury chaired the inaugural function.
The chief adviser said this youth camp is an indication of Saarc's determination to connect the minds and hearts of the people of the member countries, generate greater cohesion and understanding, and bridge the gap, if any, in the mindsets of regional countries.
“It's aimed at bringing the young people of South Asia under one roof thereby creating an environment for closer interaction among those very people who will lead us to face the challenges of the new millennium,” he said.
The chief adviser said the Saarc Youth Camp will bring young minds from Mazar-e-Sharif to Male, Quetta to Kathmandu, Colombo to Kolkata, and Thimpu to Dhaka for meeting annually in an institutionalised but informal sittings.
Welcoming the participating youths, he said they have already earned recognition as outstanding young people with leadership qualities, strength of character, intellect, knowledge and skills.
“The enthusiasm, resilience and courage of our youths make us hopeful about our future. Their ideas, visions, energy, and most importantly willingness to bring about changes in society stimulate us.”
“Their indomitable urge to overcome the status quo and the courage to take risk constitute the critical elements needed for our progress.
They represent our future and remind us our own responsibilities for the future generation,” he added.
He said as the Saarc countries strive for a common identity for the 1.6 billion citizens of South Asia, the meeting of the young men and women from the region bears significance.
Fakhruddin said direct interaction with each other might turn out to be the first critical step towards building an enduring relationship of understanding and cooperation that would lead the region to the cherished goal of socioeconomic prosperity.
He said Saarc has come a long way over the past two decades in consolidating regional responses to many challenges that confront before them and youths remain at the centre of many of these regional initiatives like education, health, poverty alleviation or tackling socio-cultural vices like drug abuse, human trafficking and violence.
He, however, said one important area which had not received due attention in the past was creation of a common forum for direct interaction between youths of the Saarc countries.
Bangladesh proposed holding of the Annual Saarc Youth Camps in the 14th Saarc Summit in New Delhi in April last. “I'm grateful to my colleagues in other South Asian capitals for welcoming my proposal,” the chief adviser said.
Later, the chief adviser visited the display centre of the self-employed youth of Bangladesh at the National Youth centre.