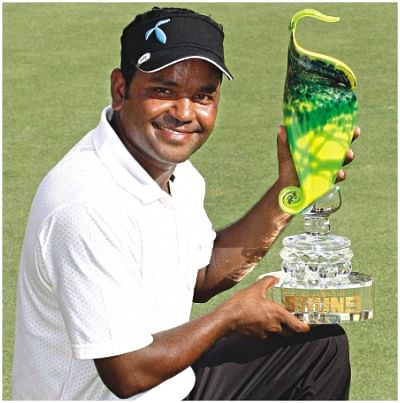 Siddiqur Rahman became the pride of the nation by winning an Asian Tour professional golf tournament as the first Bangladeshi on Sunday, when he lifted the Brunei Open title in Bandar Seri Begawan.
The 26-year-old Siddiqur, who hails from Madaripur, secured his career breakthrough in Sunday's play-off with a par on the first extra hole as South Africa's Jbe Kruger missed a 10-foot putt on the par four 18th hole at the Empire Hotel and Country Club.
He bogeyed the last hole in regulation play for a four-under-par 67 to slip into the play-off after Kruger established the clubhouse target of 16-under-par 268 in the US$ 300,000 tournament.
"It is very exciting. I'm the first Bangladeshi to play on the Asian Tour and in the two years that I'm on Tour, I have finally won a tournament," said the new champion after winning the Open.
Siddiqur was the only golfer who won all the amateur circuit in the region as an amateur golfer and he also won four major tournaments in the India circuit in 2008 but his performance in the qualifying phase of the last year's Asian tour was ordinary.
He became a professional golfer in April 2008 after playing the qualifying phase in India in February of the same year.