Riaz and Tina: A perfect match on and off screen | The Daily Star
Skip to main content
বাংলা T
Tête-à-tête

Riaz and Tina: A perfect match on and off screen 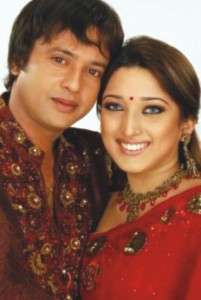 Riaz and Tina first worked together in the dance show “Goalini Binodon Bichitra”. Subsequently they appeared as anchors on the musical talent hunt “Shah Cement Nirman Taroka”. On screen they are a star couple, but what about off screen? The Daily Star explores the conjugal lives of the two.
Everyone knew Riaz as a "hero" of the big screen. So did Tina. Back then Tina was a model, anchor as well as a connoisseur of classical dance. Tina was the first to come across him at a restaurant. The first time Riaz saw Tina was three years back, at his friend's office in Dhanmondi where they were discussing an upcoming dance show (“Goalini Binodon Bichitra”). In Riaz's words, “There was this girl, really childish and carefree. And I noticed her in the crowd. Later, my friend told me that she would be dancing with me on the show.”
After that the two met many times and spent hours talking over the phone. And over the years they gradually discovered the special connection between them.
On December 18, 2007 they tied the knot.
Although Riaz is a celebrated actor, most of his fans are unaware that he began his career as a pilot. At the moment he is also an entrepreneur. Presently he is occupied with his business concern, which is promoting a new product. “Within a year, I hope to settle down in my business. After that I am thinking about returning to my acting career. That may happen in late 2010, or early 2010. Let's wait and see,” says Riaz.
Tina was more into hosting shows since she was a child. In fact the first show she anchored was a cartoon show: "Mon Cherry Tom and Jerry". She has been modelling for around seven/eight years. She also teaches at BAFA in Uttara.
When she is not busy, Tina visits Riaz at work. “Those are times when I can put a stop to my monotonous office work. She would come and use the computer to play Farmville or something, and I would just pack everything and watch her,” says Riaz.
How do you plan special days? “We don't plan ahead,” Riaz says. “We love to go on vacations, attend parties, or movies; at times we just stay in, or go out to have ice-cream.” In a lighter vein, he adds, “At dead of night, sometime around 3am, Tina suddenly felt like having ice-cream. Now what could be done as all the shops were closed? Well, we took the car and set out in search of ice-cream. Not one ice-cream shop was open in sight. Later we went to the airport. That was a relief since they had ice-cream at the airport. The problem was that we had to buy tickets to get in. One of the people recognised me and helped us get some ice-cream.”
“These impulsive moments keep the relationship interesting,” says a smiling Tina.