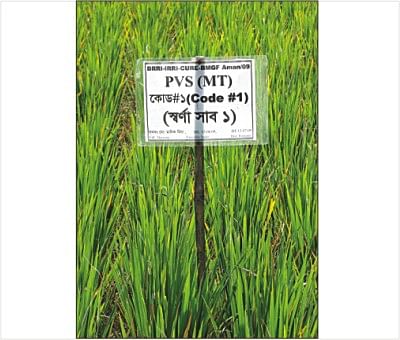 Bangladesh is set to officially release three flood-tolerant rice varieties that would help farmers prevent up to a million tonnes of annual crop loss caused by flash floods, researches said.
Officials concerned told The Daily Star that these rice varieties with submergence-tolerant gene, known as Sub1, can withstand two weeks of complete submergence.
"In September, we applied to the Seed Certification Agency for release of the three submergence-tolerant varieties, Swarna-Sub1, BR-11-Sub1, and BR-11-Recombinant-Sub1. Once the Agency completes its field evaluations, these varieties will be officially released, hopefully this year," said Khandakar Iftekharuddaula, principal investigator of the project of Bangladesh Rice Research Institute (BRRI). The Bill and Melinda Gates Foundation supports the project.
The flood-tolerant versions of the high-yielding varieties (HYVs), popular with farmers and consumers, that are grown over huge areas across Bangladesh are effectively identical to their susceptible counterparts but those recover after severe flooding to yield well.
The Sub1 varieties withstood submergence quite well during this year's flash floods in Jamalpur's Dewanganj, Kurigram's Kachir Char, Mymensingh's Dhobaura and Sylhet's Golapganj, said Iftekharuddaula, who is the mastermind behind getting the Sub1 gene into BR-11, the country's most popular rain-fed aman rice variety.
The Sub1 varieties have been tested in six BRRI fields and nine farmers' fields over the last couple of years and all results show positive signs.
During a recent visit to one such field in Rangpur's Darshona, it was found that 35 farmers on trial cultivated Swarna-Sub1 on 19 acres.
MA Mazid, former chief of the BRRI Regional Station in Rangpur, told The Daily Star that Sub1 at Darshona remained unharmed despite being completely submerged for nine to 16 days this year.
Mazid, who now heads Cereal Systems Initiative for South Asia, one of the eight hubs of the International Rice Research Institute (IRRI), said 65 percent farmers cultivate BR-11 during aman season, which is susceptible to flash floods or rainwater over 10 days. "So the Sub1 varieties now hold the potential to become a good replacement for BR-11."
There are four different Sub1 varieties, IR-64- Sub1, Samba Mahsuri-Sub1, BR-11-Sub1, and Swarna-Sub1, at the Darshona trial site. Of these four, the former two are relatively shorter-duration rice while the later two takes a long time to harvest.
The new varieties were made possible following the identification of a single gene that is responsible for most of the submergence tolerance. In 1995, David Mackill, then at the University of California (UC) at Davis, and Kenong Xu, his graduate student, pinpointed the gene in a low-yielding traditional Indian rice variety known to withstand floods. Xu subsequently worked as a postdoctoral fellow in the lab of Pamela Ronald, a UC Davis professor, and they isolated the specific gene called Sub1A and demonstrated that it confers tolerance to normally intolerant rice plants.
David Mackill, who now heads the Plant Breeding, Genetics and Biotechnology Division of IRRI, along with Pamela Ronald visited the Rangpur site of Sub1 varieties November last year.
"The potential for impact is huge," David said during his Bangladesh visit. "In Bangladesh, for example, 20 percent of the rice land is flood prone and the country typically suffers several major floods each year. Submergence-tolerant varieties could make major inroads into Bangladesh's annual rice shortfall and substantially reduce its import needs."
BRRI's rice scientist Khandakar Md Iftekharuddaula worked as a postdoctoral fellow with Mackill and got the gene responsible for submergence tolerance into BR-11 early 2007.
Zeba I Seraj, a professor at Dhaka University's biochemistry and molecular biology department, explained to The Daily Star how Sub1 works. "As water inundates rice fields, Sub1 gene helps rice plants remain 'metabolically inert' for up to two weeks; thereby, keeping the plants unaffected. But if the water remain stagnant for a longer duration, it will not be possible for the crop to withstand."
Zeba, who has been working for years on different stress-tolerant rice varieties, said farmers would be benefited if the submergence tolerant rice varieties are released soon.
The Philippines released its first submergence-tolerant rice variety, Submarino 1, in July this year.