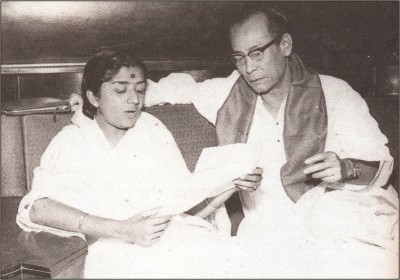 Kumar Shri Sachin Dev Burman (October 1, 1906 - October 31, 1975), also credited as 'Burman da' or 'Sachin karta', was one of the most celebrated music composers for Hindi movies and a Bengali singer and composer. Burman composed music for 100 movies, including Bengali films.
Today marks his 34th death anniversary.
Sachin Dev Burman was born in Comilla (then East Bengal), to Nirmala Devi and Nabadwipchandra Dev Burman, the second son of Ishanachandra Dev Burman, the Raja of Tripura. Sachin was the youngest of five sons, of his parents, who had nine children in all.
He began his training in classical music under his father, who was a sitarist and dhrupad singer.
He did his B.A. from Calcutta University and started his formal music education under K.C. Dey (from 1925 to 1930). In 1932 he came under the tutelage of Bhismadev Chattopadhyay. This was followed by training from Kahifa Badal Khan (sarangi player) and Ustad Alauddin Khan. Kazi Nazrul Islam also spent time in their family home, Comilla House, in Agartala.
He started working as a radio singer on Calcutta Radio Station in 1932, where his early work was based on East Bengali folk music, and soon made a reputation for himself in folk and light classical music. His film compositions were often influenced by his huge repertory of folk tunes from the Bhatiali, Shari and Dhamail traditions.
In the following decade he reached his peak as a singer, cutting as many as 131 songs in Bengali, and also sang for composers like Himangsu Dutta, RC Boral, Kazi Nazrul Islam and Sailesh Das Gupta.
In 1934, he attended the All India Music Conference, at the invitation of Allahabad University, where he presented his Bengali Thumri, to an illustrious audience, with the likes of Vijaya Lakshmi Pandit and the inimitable Abdul Karim Khan of Kirana Gharana.
As a music composer, he started with Bengali plays, "Sati Tirtha" and "Janani", and eventually gave his first score in film, "Rajgee" in 1937. He continued composing music for Bengali films, even after he moved to Bombay (now Mumbai) in 1944.
In 1950s, SD Burman teamed up with Dev Anand's Nav Ketan Productions to create musical hits like "Taxi Driver" (1954), "Nau Do Gyarah" (1957) and "Kalapani" (1958). With the success of their second film, Baazi (1951) he made it to the top. While every song in the film was a hit, one stood out for special appeal -- "Tadbir se bigdi hui taqdeer", a ghazal that was occidentalised into a seductive song.
Burman's thin yet powerful voice was often used as bardic commentary to haunting results -- a typically Bengali trait -- as in "Orey maajhi mere sajan hai uss paar" (from "Bandini", 1963), "Wahaan kaun hai tera" (from "Guide", 1965) and "Saphal hogi teri aradhana" (from "Aradhana", 1969), for which he received the National Film Award for Best Male Playback Singer for the year 1970.
Bengali music and sensibilities remained Burman's muse throughout his illustrious career in the Bombay film industry. In 1963, he composed songs for "Meri Surat Teri Aankhen" and Manna Dey sang the song "Poochho na kaise maine" in raaga Ahir Bhairav. The song was based on a Bengali composition by Kazi Nazrul Islam, "Arunokanti ke go jogi bhikaari".
SD Burman was a frank and outspoken man, with a strong sense of self-pride. He openly criticised people whom he disliked or whose abilities he suspected (like the singer Mukesh). But he was widely respected by the industry as a fussy genius.
Burman went into coma soon after recording the song "Badi sooni sooni" for the film “Mili”. He died on October 31, 1975 in Bombay.
Compiled by Cultural Correspondent.