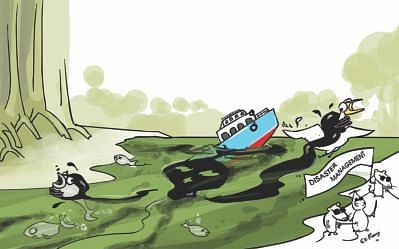 AN oil tanker carrying around    350,000 liters of furnace oil sank in    a river near Mongla in the early morning of December 9. The Mrigmari-Nondabala-Andharmanik dolphin sanctuary is under threat due to oil spill. Fishes and other aquatic animals will die, and the mangrove forest will start dying within a short time. Wildlife experts and environmentalists are concerned as the spill will also cause contamination on the shorelines of canals and rivers, where the animals of the mangrove forest come to drink. The situation is of great concern to the nation as well as world community of environmental ecologists.

As per the US Department of Commerce, National Oceanic and Atmospheric Administration (NOAA), 2010, key points of oil toxicity are:
* Mangroves are highly susceptible to oil exposure; oil spills may kill them within a few weeks to several months;
* Lighter oils are more acutely toxic to mangroves than are heavier oils. Increased weathering generally lowers oil toxicity;
* Oil-impacted mangroves may suffer yellowed leaves, defoliation, and tree death. More subtle responses include branching of pneumatophores, germination failure, decreased canopy cover, increased rate of mutation, and increased sensitivity to other stresses;
* Response techniques that reduce oil contact with mangroves, such as chemical dispersants, reduce the resultant toxicity as well. Tradeoffs include potential increased toxicity in adjacent communities, and increased penetration of dispersed oil to mangrove sediments;
* The amount of oil reaching the mangroves and the length of time spilled oil remains near the mangroves are key variables in determining the severity of the effect;
* Mangrove-associated invertebrates and plants recover more quickly from oiling than do the mangroves themselves, because of the longer time for mangroves to reach maturity.

The reports also indicate the following key points for mangrove recovery and restoration:
*    Mangroves can take more than 30 years to recover from severe oil spill impacts;
* Adequate tidal exchange is critical to restoration success;
* Mangrove seedling and tree density and health are the only widely measured recov­ery indicators at many spills;
* Restoration that works with natural recovery processes to reestablish mangrove habi­tat is the best course of action over the long term.

Mangrove ecosystems around the world suffer degradation from logging, coastal development, spraying of herbicides, conversion to fish ponds, and from oil spills and other pollutants. The continued loss of mangrove forests worldwide underscores the importance of projects focusing on restoration of forest structure and functions.

Since mangroves take 20–30+ years to recover from severe oil spill impacts, restoration projects are needed to speed up the recovery process. Adequate tidal exchange is most critical to restoration success. Mangrove restoration projects in Florida and the Caribbean often involve re-establishing natural hydrologic and tidal regimes, planting mangrove propagules, and/or planting marsh plants to provide a “nursery” habitat that can be colonised more easily by mangrove trees than bare areas. An oil spill alone rarely changes the basic geophysical appearance and shape of the mangrove ecosystem; this is caused by hurricanes, clear-cutting, and development.

As with other marsh ecosystems adversely impacted by oil spills, we have learned valuable lessons from past mangrove restoration projects, including those that failed. Restoration projects need a clear goal from the outset that is based on understanding the mangrove ecosystem's natural ability to recover. The most effective role for restoration projects is to correct or assist when natural recruitment mechanisms are impeded or no longer functioning.

Going through the report of US Department of Commerce, (NOAA), 2010, it is assumed that restoration after an oil spill might be easier than after an event that substan­tially changed tidal elevation or hydrology or decimated mangrove trees. Therefore, we should not waste time by creating unnecessary controversy but come up with ways to solve the problem.

The government has already formed an investigation committee which will submit its report within a short time with recommendations and causes behind the incident. Meanwhile, the government can sit with ecologists/environmentalists, wildlife experts, civil society and the international community to find out a way to overcome the devastating situation so that the mangrove forest can be saved. The government also needs to involve internationally reputed oil, gas and energy companies that have the proven capacity for handling and cleaning the spills from rivers.