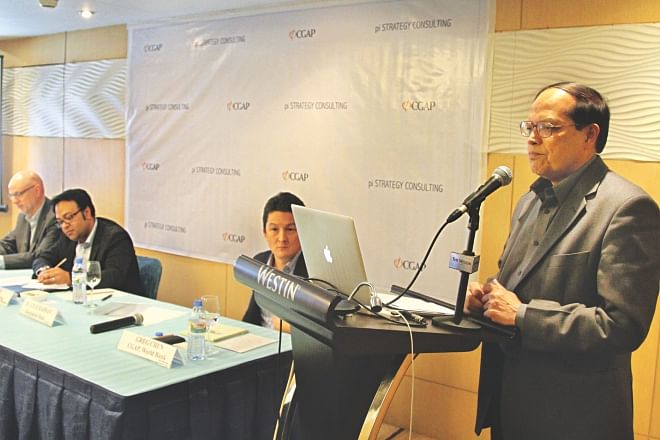 Atiur Rahman, governor of Bangladesh Bank, speaks at the launch of a mobile financial service survey conducted by pi Strategy Consulting in partnership with the World Bank's Consultative Group to Assist the Poor, at the Westin in Dhaka yesterday. Photo: Star

Nearly 48 percent of mobile finance service (MFS) users live in urban areas while 32 percent reside in rural areas and 20 percent in semi-urban neighbourhoods, a study finds.
Less than 20 percent of the users are female, according to the study: Mobile Financial Services Consumer Insights.
Rural users prefer receiving money rather than sending, the study suggested, which was prepared by pi Strategy Consulting in partnership with the CGAP (the Consultative Group to Assist the Poor) of World Bank.
The average monthly income of the MFS users stands at Tk 8,007, which is lower than the national average, and nearly three times the poverty line average income, said Pial Islam, managing partner of pi Strategy Consulting.
The majority of the MFS users do not have bank accounts in formal financial institutions, he said.
The average ticket size of mobile banking transactions is Tk 3,370, which is much lower than that of courier service transactions, Islam said. 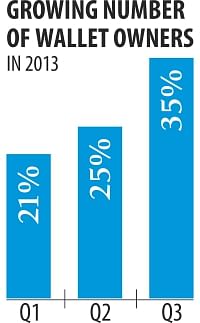 More than four fifths of the users transfer funds between the members of same economic household, he said.
He spoke at the launch of the research findings at the Westin Hotel in the capital yesterday.
Nearly 1,000 respondents from four divisions of the country took part in the research, he said.
The study reports that those who are using mobile banking tend to conduct more frequent transactions of lower monetary value compared to their fund transfer patterns in the past.
All six mobile phone operators are involved with MFS providers in some capacity while by now 28 banks have MFS permission and 19 are in active operation, according to the central bank.
Key players in MFS are: bKash, DBBL Mobile Money and M-Cash of IBBL with 1.32 crore registered customers with about two lakh agents nationwide, generating more than 10 lakh transactions amounting more than Tk 221 crore a day.
The central bank's number one goal was to widen financial inclusion, so the bank released the mobile financial service in a bank-led pattern, Atiur Rahman, governor of Bangladesh Bank, said at the programme.

He highlighted the importance of mobile financial services towards achieving financial inclusion by offering appropriate services to vast majority of the unbanked in Bangladesh.
“This is the most comprehensive study on mobile financial service customers' insights that has ever been conducted in Bangladesh.”
“The interviews that were ultimately accepted were thus of the highest quality while allowing the findings from the research to be statistically significant with a confidence level of 95 percent,” Islam of pi Strategy said.