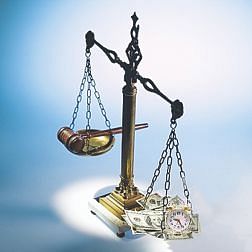 SECTION 32 of the Artha Rin Adalat Ain, 2003 (ARAA) deals with the procedure for presenting objection petitions by third parties against execution of the decrees/orders of the money loan court. Section 32(2) of the ARAA provides that when a third party wants to present a petition against the execution of the decree/order of the money loan court, such party may do so under the provisions of the Code of Civil Procedure, 1908 (CPC), by depositing 10 per cent of the amount decreed or if the decree has been partially satisfied by depositing 10 per cent of the unsatisfied portion. Section 32(2) also states that if the security deposit is not made, the petition presented by the third party would be dismissed. Section 32(4) of the ARAA provides that if the court while rejecting a petition filed by a third party feels that the petition was presented with the mala fide intention of delaying the execution suit, it would forfeit the deposit and pay it to the decree-holder.

In Mollah Shahidul Islam v Md Monsur Rahman and Others, (2005) 57 DLR (HCD) 164, at the stage of the execution of a decree passed by a money loan court, the petitioner and his brother filed a petition for setting aside the auction sale of a property, under Order XXI, rules 90 and 91 of the CPC, alleging inter alia that they were not responsible for the loan as they were neither the debtors nor the third party mortgagors. The petitioners alleged that their title to the property in question had been established by a competent court and they became aware of the auction sale well after it was confirmed by the money loan court. The learned judge of the money loan court asked them to deposit 25 per cent of the amount decreed (as was the requirement until the amendment of 2010) and held that in default, their case would be rejected. The petitioners filed a writ petition against this order of the deposit. The High Court Division (HCD) upheld their petition observing that:

The petitioner in the instant case although apparently made claim over the property auction sold, but in substance they have challenged the auction sale proceeding on the ground of fraud. So the kind of claim that has been preferred does not come within the ambit of rule 58 of Order XXI of the CPC. It is further indicated in sub-section (1) of section 32 of the Ain, 2003 that the decree-holder also may file objection within the period not exceeding 30 days and can claim hearing for disposal of the claim made by the 3rd party. Therefore, the contemplation of the legislature in section 32(2) is the investigation of claims and objection as provided under Order XXI, rule 58 not beyond the periphery of rule 58, and since the petitioner filed the petition under Order XXI rules 90 and 91 for setting aside the sale on the ground of fraud they are not required to furnish any security as provided under sub-section (2) of section 32 of the Artha Rin Adalat Ain, 2003. (para 6)

The aforementioned observation of the HCD in this case is very curious. Indeed, from the fairly unambiguous wording of Section 32(2), it is difficult for one to see how has the Parliament contemplated to differentiate between various types of claims that may be made by third parties against execution of decrees passed by money loan courts. The literal meaning of the wordings would rather lead to the conclusion that for presenting any legally admissible claim by a third party, the payment of security deposit is a condition precedent for the court to consider the objection petition on merit.

Section 33(4) would imply that this requirement of deposit has been devised by the Parliament as a weapon against vexatious claims designed to delay the execution of a decree or order of the court. For waiving the requirement of deposit, the HCD needed to show that the petition for setting aside the auction sale is indeed not a claim. It is also of utmost importance to point out that the ARAA is a special law and its provision could only be interpreted by effectively subjecting it to CPC; if it could be shown that the Parliament clearly wanted that to happen. If the effect of the provision of a special law is effectively nullified through recourse to this type of interpretative method, then the whole purpose of promulgating the special law gets frustrated.

It is quite possible to contemplate that a humane consideration has prompted the HCD to take the interpretative route that it has pursued. After all, reasonable minds would probably agree that when a person has been allegedly a victim of fraud, she/he should not have to go through more pain by being asked to pay a security deposit simply for presenting a petition to the court for the claim to be heard on merit. Hence, when an innocent third party's property would be attached by a decision of the money loan court, if the third party is unable to furnish security, she/he would be left with no remedy.

On the other hand, even if no security deposit is furnished and the third party's claim is ultimately rejected after hearing on merit, the decree-holder financial institution's loss would generally be no more than a delayed satisfaction of the decree. That said when the requirement of security is waived; the threat against any vexatious claim as devised by the Parliament through the provision in Section 32(4) is also taken away.

Furthermore, it is a settled principle of law that whatever the consequence of a law may be, when the words in the statute are unambiguous, the words must be given full effect (unless, of course, the law is ultra vires) [SA Haroon v Collector of Customs (1959) 11 DLR (SC) 200]

In the light of the discussions above, it may be fairly said that while the judgment of the HCD in this case may have led to a satisfactory resolution of the disputes and justice may have been ensured; the intention of the Parliament as reflected in the explicit wordings of the statute appears to have been defeated. Thus, the apparent quest for justice by the HCD may have undermined the true intentions of the Parliament. It may be respectfully submitted that the interpretative venture of the HCD has effectively created a law and thus, indirectly encroached (even if only for the sake of rendering justice) upon a domain which is exclusively reserved for the Parliament.