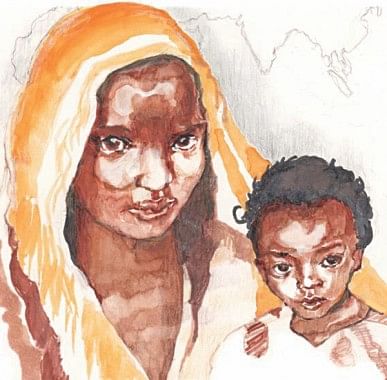 The only train that fared to Bahadurabad from Narayanganj lingered for only two minutes. Nothing was visible in the dark night. The slight hint of light seeping out from the cracks of the station-quarter left me dazzled, and the feeling retreated even before the train came to a complete stop. The black night engulfed all luminosity trying to escape from each of the well illuminated compartments. I didn't notice my hand when I extended it out of the window. It was extremely chilly. Everyone was huddled together like children.

I looked back at the man with grinding teeth. Sweat beads had formed on my forehead despite the cold. The artery in my neck was trembling with hatred and agitation. I glared at him with that stern stare; but the thin pale face of the old man was wet from tears from red-sad sunken eyes. I had then wanted very badly to have just emptied my chest by exhaling a long deep sigh.
The train had reached the quay by then. It stopped finally between two rows of coolies waiting for its arrival. All the remaining passengers started to haphazardly rush out. All the motionless people had somehow found some new energy to have started randomly shooting out in every direction without any patience. This too was a roar of vulnerability of some sort. This stupefaction has a sound of its own; something more terrifying.
There was no one left in the compartment. I thought the man would get up then. But he did not move. I didn't know why, but I could not run away.
The little girl was awake from all the running around and noise made by the leaving passengers. She rubbed her eyes, yawned, and then looked around searching for her aunt and became perplexed on not finding her. Terrified, she started to scream, "Kakima go!" she kept screaming looking at the old man with questions in her eyes. But she could not ask him anything. The cursed old man remained as he was, paralyzed like a stone, without life.
Knowing that there would be no reply from him, I yelled out as if my life had depended on it. But I realized instantly that there was absolutely no sound coming out from my throat – I was just rapidly gesturing at the girl while flaying my arms. At last when some sound did come out, it sounded very out of tune even to me, "Look in that toilet… open it… hurry… there, right there…"
The girl looked at me with a dumb expression on her face. She ran to the toilet, opened the door, and stood there astounded in shock as if struck by lightning for quite a while. She then had leapt in while screamingly violently, "Kakima go!" She couldn't stop screaming, "Jethamoshai go… ashona go… ki holo go… kaki…"
I was standing with fear gripping at my throat. All the hair on my body was standing. I was shivering. I looked at the man. He was stiffer than before. Even the sound of him inhaling air had stopped by then. I started to shake him insanely with both my hands.
I understood then, the father figure uncle would in no way look upon his younger brother's wife's dead body. I also understood that I had nothing to say to the sobbing little girl. Who would actually understand to what degree of anxiety the three of us were going through? On what different levels!
I thought of looking into the matter once. But the same unborn-hallowing-unrelenting burden that had paralyzed the old man had started to act upon me as well rendering me motionless. My eyes helplessly closed. I realized that men became captives in their own minds, in moments as such when they are inflicted and bombarded with such maiming senses.
My eyes closed down; there was nothing but darkness. Darkness, in which the body of a woman was floating away; a blood soaked body, with her mouth gaping wide open; her belly abnormally swollen; her eyes rolled inwards, from the inhuman-unimaginable pain that she had to suffer – a mother; a woman thirsty to know what motherhood meant; a mother who understood its true meaning with each of her dying breaths! There is a child in her swollen womb; a child which was alive. If only the child could have been born, the child then would have maybe achieved a lot in life; the child could have at least taken a breath in a happy world of the future. Who had barred this child from taking birth?
The whole of my being shivered in agitation. Oh the hatred that I had felt then for destruction! Unbearable!
I cannot remember the old man's face; but his silence, his stupefaction, is still entwined within my heart.

Translated by
Hasan Hafizur Rahman. He teaches Physics and Mathematics at Sir John Wilson School. He is currently pursuing a Master's Degree in Journalism from Independent University, Bangladesh, and also Coordinates Brine Pickles, the first Performance Literature and Creative Writing group in the English Language in Bangladesh.