‘Language is the soul of nationalism’ 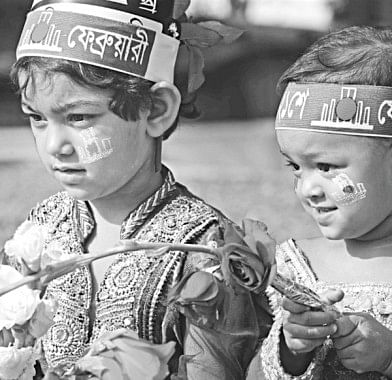 These are quotes from individuals I have debated with; asked questions. Yes, we have heard such sentiments many times. And yet, in context of the Language Movement, there is the history, the finesse captured in the terms ápon and 'nationalism' that prompts me to pen a few words; brood on Ekushey BhashaAndolon.
On Falgun 8, 1359, (February 21, 1952), demonstrators on Dhaka University campus protested the 'Urdu only policy' and demanded the then government to recognise Bengali as one of the official languages. Bullets were fired by the police to halt the protest, killing several students and activists. This engagement ushered the Language Movement to the forefront, provoking long-term civil unrest, which eventually forced central government in 1956 to enact legislation granting Bengali language its official status.
This violent episode gave birth to an image so compelling that it served as the catalyst in shaping mood of the nation into oneness, one people; moving away from the makings of past colonial decision-makers of being a nation grounded in religious precepts.
The incident cemented language attitudes and identity strategies in a manner that till date cannot neglect the social and political forces which shaped the language-nation relationship.
As a nation of unique culture with a distinct sense of nationalism, every year on February 21st we re-create that unified character which proudly announces: I am my language -- a powerful dimension of personal and social identity. The conventions, the contents, and symbolic meanings of our language create an intricate correspondence between internal (as a Bangladeshi), and external interpretation of the identity of our people (as a nation).
True, language is more than the repertoire of shared programmes and practices. It is the connector that validates our sense of nationalism: the shared feeling of pride and socio-cultural experiences.
However, nationalism and language are both dynamic notions depending on time and place in history. Today, ever so gradually and with quiet persistence in the discourse of language loyalty the old proposition has resurfaced: Is our language unique to our people? Do we or should we 'Islamise' our language so it resonates our uniqueness? Reflects 'our kind' of nationalism? Thus would 'Islamising' the language anchor the 'right essence' of loyalty in our hearts?
Such assertions are obviously very socio-politically loaded. The codification of a written language with the 'right kind of' words is a complex one; it is not only a consequence of the combination of political and cultural power, it is also a matter of being attentive to the shared phonological, lexical, morph syntactic etc. linguistic features of the language.
Before we rush head-on into the debate, the pundits need to educate us on this not so simple matter. Language simply does not stand for literary narratives. For us, the general people, perhaps it suffices to say that a writer writing in Bengali does not reconfigure the language boundaries rather it is through the implicit condition of capturing the symbolism of our culture that a trail is set toward representing our national identity and build our sense of nationalism.
We have schools where Bengali is taught as language and in others it is the medium of instruction. We need both, and let the foundation of 'proper Bengali' be laid there. Instead of initiating a 'language cleansing' movement, perhaps we should celebrate the fact that vignettes of our culture does indeed filter into our literature defining the integrity of our language, and thus gets anchored.
Needless to say, simply 'soil-right,' 'birth-right,' and 'language-right' does not lead to the perception of nationalism, neither is it the awakening of a nation to awareness by virtue of one incident; rather it is also the benign everyday construction of a sense of national identity through the inconspicuous symbols of 'fairy tales, folklore, arts and crafts, the countryside, the regional differences, and yes, even the etiquettes that invents' and reinvents a nation.
It is this collage that is held together, expressed, codified, practiced, and indeed captured through language that generates the unique oneness.
Another popular concern is the role of media in muddling the Bengali language! The worrisome issue is the heavy intrusion of local dialects in TV sitcoms and radio programmes. We need to remind ourselves that the 'speech communities' of Barisal, Noakhali, Sylhet, Chittagong, Dinajpur and other areas practice no more than regional accents -- varieties of same language. Their particular phonological and prosodic markers simply constitute accents which in linguistic sense are not varieties of language that are distinct from each other by grammatical and syntactic criteria.
Perhaps a speaker from Tangail may not fully understand a speaker from Chittagong (!), yet they operate within the common language script. Language is indeed an abstract construct, based in part on linguistic canons, but more importantly on socio-psychological factors. So, should we be concerned that such regional accents are a threat to our language? The key to distinguishing a language from a classification lie more often than not in socio-political conventions. Perhaps, a discussion for another day.
I would rather our language experts expand on the linguistic technicalities so our sentiments do not run amuck on such sentimental issues. I, for one, wish to contemplate on Billing's assertions that "a language (dialects, regional accents) will die for want of regular users, so a nation must be put to daily use." The variety is our uniqueness, the fabric of our national identity, one of the foundations of nationalism. It is time we celebrate inclusion; preserve the variation. Luckily, our culturally conscious community is already in that mode.
I humbly sign off by saying I am multilingual, and yet my dreams always speak to me in my mother-tongue! I share with my children the folk-tales that paint the magic of our language for them. To us, our language is lyrical and amarder ápon; a clear validation of our identity, our roots.

The writer is an Academic and writes from Carbondale, Illinois, USA