In defence of cultural identity 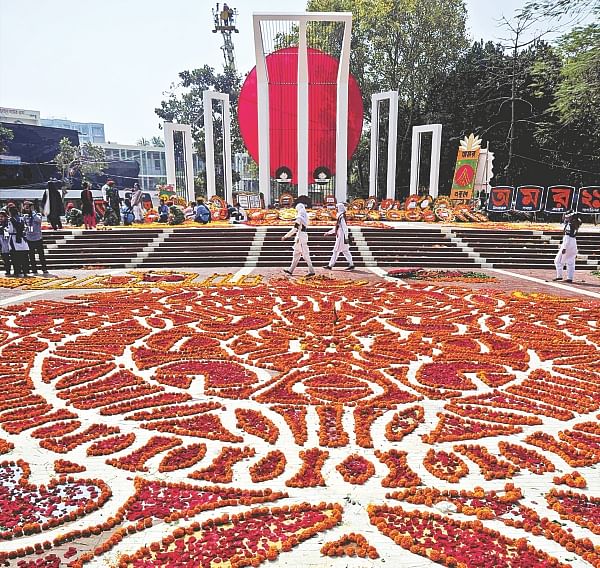 Every year, we take a step back to remember those who laid down their lives on the fateful day of February 21, 1952 to defend and uphold our mother tongue and establish it as state language. These young men took on the powerful state machinery of Pakistan to defend the right of every Bengali citizen to speak their own language. The language movement in many respects was more than a movement to defend the Bengali language; it was an endeavour to defend all that we hold dear in terms of national cultural identity.
The young men who died in 1952 were the earliest of Bengalis to shed blood for their land in a state that had turned its back on them with brazenness of the worst kind. The attempts at silencing the movement only paved the way for greater struggles that would face the nation in coming years. Countless Bengalis would be called upon to shed blood in consequent movements of '69 and ultimately culminated in the independence struggle of 1971. The language movement remains a reference point for national inspiration.
Today in the month of February, 2013, we are witnessing history being reborn with tens of thousands of young people clamouring for justice at Shahbagh. The premise may be different for these young people but their cry for justice is essentially the same as it was in '52 or '69. The quest for upholding the basic cultural values of this nation has found a new voice at Shahbagh. Today's youth gain strength and inspiration from the martyrs of February 21. Barkat, Jabbar, Rafiq, Salam and all those who were gunned down in cold blood on that fateful day gave inspiration to successive generations of Bangladeshis at home and abroad to carry forward their cultural values.
The Unesco's declaration of this day as the International Mothers' Language Day obliges us to not only develop Bengali language through its use in various spheres of national life but also to show respect to all languages.
Mahfuz Anam
Editor