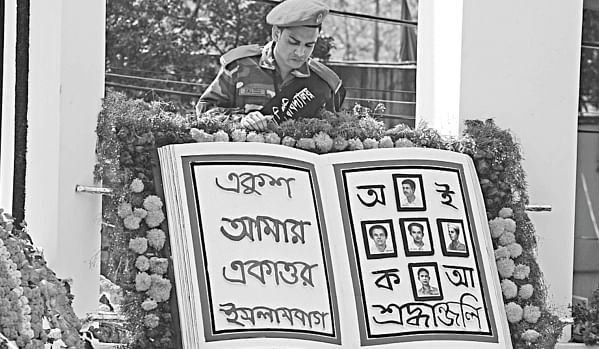 The UN Charter of Human Rights has a developmental history since 1948. Although it was traced back to the zenith of the Greek civilisation by historians of human rights, our main concern here is the UN charter and its reflection in Bangladesh constitution that was promulgated in 1972 just after the independence of Bangladesh in 1971. There are a member of critical studies of the constitution of Bangladesh by competent scholars like Justice Habibur Rahman, Justice Ebadul Hoque and many others. Those studies were done from legal, juridical and comparative constitutional points of view. Here we intend to look at the constitution of Bangladesh, particularly, from sociolinguistic points of view. Incidentally, sociolinguistics is a discipline that deals with interconnectivity of language and society, though apparently it is a branch of general linguistics. Sociolinguistic focus is on the connectivity of language structure and social structure.

Macro Sociolinguistics:
In Macro Sociolinguistics, State is considered as an elaborate societal unit within the purview of global society. Therefore, state as a society is a super ordinate concept, so is language; because a language is a super ordinate concept encompassing a number of subordinate units, subjunctive structure and discrete, subsystem. Due to these complexities, it is really difficult to relate the linkages between the two: state constitution and linguistic human rights.

Concept of human right:
The concept of human rights has its own developmental history. As we know, man's journey from prehistoric primitive society to civilised society is an incremental progression. From the concept 'Might is Right' to the concept of Man is above all supreme; nothing is beyond man Ô mevi Dc‡i gvbyl mZ¨Õ. This was the realisation of sages of Bengal when the brutal aggressions were committed on any community here or elsewhere. Bengal delta was ravaged several times from within and beyond: Invasions by Turks, the Marathi, Portuguese, and Mongols have left marks of bitter consequences in our historical memory. The most recent ones came from Pakistan's military machine, more particularly, from Punjab, Baluchistan and Sindh's organised attack on the people of the delta region of East Pakistan in 1971. The People of the Region faced these invasions heuristically, sometime by assimilation, sometime through fortified protective resistance to the brutal aggression.

Product of war:
The Bangladesh Constitution is a product of the most recent war, i.e. war of independence in 1971. It was promulgated on fourth day of November 1972. The Charter of UN on Human rights has been a product of World War II that had ended in 1945. Therefore, both the UN charter and the Bangladesh constitution are the product of wars; one was large-scale global war; the other one large-scale regional war. In essence, they have tried to reset the epithet; might is right' and established the truth that right to life is an inalienable right for people. So the Article I of UN charter goes with this proposition.
“All human beings are born free and equal in dignity and rights. They are endowed with reason and conscience and should act towards one another in a spirit of brotherhood”
The name of Eleanor Roosevelt is involved in this draft of the UN, chapter, we must remember the human mind that has created these Sentences and understand the background of the proposition, in a world where brutal aggression annihilated millions of innocent souls for no faults of them; the same backdrop is true of the war of independence for Bangladesh in 1971.
This paper intends to focus on point of the charter II of the UN that says- “everyone is entitled to all the rights and freedoms set forth in this declaration without distinction of any kind, such as race, colour, sex, language, religion, political or other opinion, nationality or social origin, property, birth and other status”.
This article has some more content on non-distinction between person to persons of various statues of limitations of sovereignty which I would quote here, because of the point of my discourse, which is linguistic human right. In this charter, point of race, colour, sex, language, religion, opinion, origin, property, birth and other status etc. has been emphasised within the same bracket. My point of discussion is Language especially, language of the constitution of Bangladesh, more pointedly article 3 of the constitution of Bangladesh that says 'The state language of the republic is Bengali'.
This proposition is an unequivocal proposition. It was a declaration of acceptance without any reservation, without any condition or constraints. From sociolinguistic perspective the declaration in an absolutely commissive statement, hence it has not taken into account the socio-historical role of other languages, which have been functioning in various domains of social dynamics. Multilingual reality of the social dynamics had not been taken account of, neither English nor Arabic nor other minor languages functions were given any place in the clausal space of the constitution. As a result linguistic human rights remain subdued within the broad range of four cardinal principles of the constitution such as democracy, socialism, secularism and nationalism.

English was unnoted:
English has long been serving the society in law, education and office for more than two hundred years; Arabic has been serving the major community's ritualistic domains; Sanskrit and Pali also have been serving same ritualistic functions in the ritual functions of relevant communities. The rights of the minor language community and speech community were not taken into consideration. The consequence is the cranky progression in the language situation of Bangladesh. In order to mitigate the problem the question of Linguistic rights clausal addition is a considered need in the constitution.

Diglassia:
Bangladesh constitution not only bilingual but also diglossic, The H-variety which is the constitutional style of Bangladesh was having somersaulting shifting towards so-called L-variety of ninetieth century at the initiative taken by Mr. Promotho Chowdhury and Sir Rabindranth Tagore, two great personalities with a credibility of individual authority on language shift rational. They have followed, what is called in the west the principle of least effort propagated by philosopher zipf, knowingly or unknowingly.
The constitutional position of H-variety and educational status of L-variety make the cranky dynamic still harder to move around smoothly. So a revisit of the linguistic Human right in Bangladesh is a main agenda in pragmatics of language planning for language development.

UN prerogative:
United Nations has drawn criticism for relying too heavily on English, not enough on the other five official languages. Spanish speaking member states formally brought this to the attention of the Secretary General Kofi Annan, in 2007, who played a key role in establishing International Mother Language Institute in Bangladesh. While in response to the criticism he said that full parity of the six official languages was unachievable within current budgetary constraints, but he nevertheless attached importance to improving the linguistic balance.

Balancing the difficulty:
UN document mentioned that the balance is not yet established where weightage is given to two official languages, namely English and French. Therefore it can be said that principle of equality of linguistic human right though accepted in UN, equidistant balance could not have achieved within the organisation.
Bangladesh's demand for status in UN, though respected with democratic and demographic norm but budgetary constraints and other problems remained unresolved. So the question of linguistic human right remained static in principle. All official languages of UN are not working languages of its all organs. There are limitations and constraints in the use of them equally with the same balance of French and English.

The writer is Professor, Institute of Modern Languages, University of Dhaka