Ekushey, a tale of the soul | The Daily Star
Skip to main content
বাংলা T

Ekushey, a tale of the soul 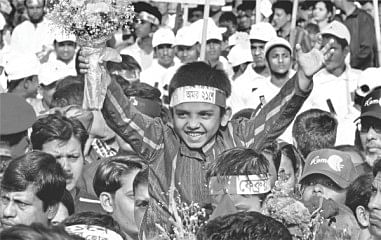 Rashtro Bhasha Bangla Chai ... Rashtro Bhasha Bangla Chai (we want Bangla to be the state language), the sonorous emphatic slogan literally ripped the air around us, then children with little comprehension of the enormity of what was unfolding. Mesmerized by the stirrings in the soul, in no time I found myself marching shoulder-to-shoulder in a procession heaving with great commotion unleashed because of onslaughts Bangla had been subjected to. That was my first excitement of being part of a people's movement. It etched an indelible impression on my mind.

Children of today walk barefoot like their forebears with a black badge on their lapel singing to the melancholic tune -- Amar Bhaier Rokte Rangano Ekushey February, Ami Ki Bhulite Pari -- converge on the language martyrs' memorial premises to pay their homage to our first martyrs. I feel transported back to that moment of my childhood baptism in fire.
Ekushey taught us to protest injustice in all forms, linguistic, cultural and political. The 1952 language movement, 1962 education movement, six-point charter of demand for autonomy launched in 1966, 1969 popular uprising, 1971 liberation war and the 1990 anti-autocracy movement are all woven through a common thread into an epical saga.
Now we are witnessing the Shahbagh phenomenon of a youthful resurgence triggered by social media but spreading to the four corners a new message of hope. If Ekushey is a umbilical reference-point for all our subsequent national inspirations and aspirations, Shahbagh has added value to such a heritage. Just as the language movement was a resounding assertion of our cultural ethos, so does the upheaval of Projonmo Chottor root for secular pluralistic values. The latest resurgence of patriotism revolving around Shahbagh has demonstrated the non-state actors' power of mass galvanization.
The biggest benefit comes from the positive moral force released by the present genre of protestors against injustice. By one stroke, the values that our Liberation War embraced and established in a new country through the 1972 Constitution have been reinforced by the Shahbagh experience.
The aspirations of the people for an equal opportunities society are yet to be met and that is where the country would be looking to the youth for leadership.
Coming to the operative parts of the significance of the language movement in a free and independent country, the list of lamentations would be longer than that of achievements.
The first message we draw is one of still gaping deficit in terms of literacy coverage. Whereas Bangla alphabets should have been the prime mover for the spread of literacy, the glass remains half-empty. The Three R's elude a big segment of our people but with a thriving mobile network it can be imparted to a wider audience. The literacy situation has improved to an extent and digitization of communication holds out a fresh prospect for an expansion of adult literacy in particular. Yet, six decades since a successful language movement we fall short of hundred percent literacy.
It's a pity but there is more to the irony. Of the total Bangla-speaking people in the world, over 40 percent live beyond the territorial borders of Bangladesh such as West Bengal, Assam, Tripura, not excluding, of course, the large Bangla-speaking Diaspora. It is the sixth largest among the world's languages and the UN has adopted it as its official language. The UNESCO by declaring Ekushey as the International Mother Language Day has paid tribute to our language martyrs in awe of the extraordinary sacrifices made by Salam, Barkat, Jabbar in defense of our mother tongue.
In the context of all these positive factors, we should be taking stock of how far Bangla language and literature have prospered in Bangladesh. The focus at once swings on to the Bangla Academy. It can play a huge role in the growth of Bangla language and literature, in a more substantive way than it has been able to so far. The academy's endeavours need to go beyond organising Boi Mela, presenting some new and old genres of writers, translating books in foreign language into Bangla and giving awards on a limited scale. The choice of books for translation in both ways is far too constricted missing out on much of the contemporary world literature and repository of knowledge.

Hardly any textbooks or books of knowledge have been translated which could bolster use of Bangla in the field of higher education. The use of Bangla in writing out scripts in different academic and competitive service examinations tests does not draw from any positive impulse but largely by default. The dearth of English speaking teachers and lack of translated knowledge-based texts have impelled the students to make do with Bangla. This is neither linguistic progress nor is it facilitation of Bangla as a medium of instruction and learning in higher academia.
The use of Bangla in a meaningful way is often looked at as a daunting challenge which it need not be. For, if the Bengali lexicon is not adequate for rendering Bangla equivalents to English technical terms, the latter can very well be accepted as they are.
The job is cut out for Bangla Academy. Autonomy cannot be an issue for Bangla Academy because it is considered as a given to it. Where enrichment of Bangla language and literature is the academy's TOR, it should have an ample degree of freedom of action like the French Academy, to name only one. If there is any shortfall it will have to be met. Bangla Academy should get all the logistical and financial supports it needs to have panels of competent researchers and translators. It needs to have a statement of not just mission but of vision as well. Examples abound of how languages are constantly transforming and developing in different settings particularly in the English-speaking world. The volume of our translations works compares badly with the way our iconic works have been translated in Japan, Russia, England, France, Canada, India, to name the only obvious ones.
It is heartening to note that legal experts have lately urged the authorities for extending the practice of Bangla in the proceedings and verdicts of the higher courts. Former chief justice Muhammad Habibur Rahman stressed the point that there should not be any 'ifs' and 'buts' about the use of Bangla in higher judiciary. He took on the issue in an emphatic fashion, saying, "If the constitution, which contains many complex matters, is written in Bangla, then why the court proceedings and verdicts could not be written in the language."
We have an international mother language institute. Its purpose is not only to inculcate in our people the respect for other mother tongues but let a thousand flowers bloom in other languages as well.
A final word for taking firmly to a bilingual course to stay effectively connected with the business world. Whilst English learning should be beefed up in as many ways as possible focusing on weak areas, we do need to learn Chinese, Spanish, French, to be a vibrant part of the highly interactive competitive global paradigm.

The writer is Associate Edtior, The Daily Star.