Portraits of our women 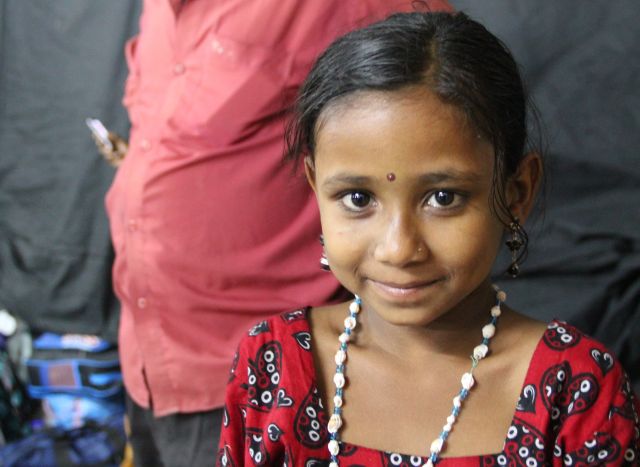 Last week I visited Barisal to better understand how to economically empower extremely poor women there. I had heard that Barisal was a particularly conservative district when it comes to educating and capacitating their girls and I wanted to explore the issue. On my journey, l met 3 beautiful women who helped paint my understanding of the challenging landscape.
Aboard Parabat 9, I met a seven year old girl named Reema. A few clicks with my camera turned her petulant scowl into a bright smile. She told me she was heading home after attending her sister's marriage in Dhaka. She opined that her father had spent Tk.30,000 on her sister's dowry and he had two other daughters left to wed before her. Her mother wasn't strict about school, so she liked to sell flowers to passers by instead. Her goal was to save up her own dowry.
I asked her whether it wouldn't be better to get a job and skip marriage altogether. She looked at me stunned. Then she explained patiently, as though I was an imbecile child, a woman must get married to protect her parents' reputation. I told her that most men leave their women. She agreed. Indeed most of her female cousins were single mothers. Still, she insisted, abandonment was less disgraceful than spinsterhood. This reminded me of how narrow the sea of opportunities must seem to little girls of poor backgrounds.
The second girl I spoke to was Rani, mother of a crippled boy. She looked not even 20 but she was already alone. Her husband left her after her son was born, claiming she must have been adulterous to have been cursed with a cripple. When I asked her what she wanted, she was able to articulate her demand for support from the government, which I'll add, is quite rare. Most of our 25 million extremely poor people do not hold the government responsible for their welfare.
Rani said she wanted the government to provide skills and jobs to mothers of crippled children who, more often than not, had to support their children alone. I asked her what she dreamed of. She said she prayed that her husband would return to her. I pointed out that the two bit crook had abandoned her once. She said at least if he was home, other men would stop picking on her.  This reminded me of how insecure a single woman is living in today's society.
The third woman I spoke to was an adorable old nani. She had white hair, plenty of wrinkles, and she was blind. Upon hearing that I had come from Dhaka to "help," she broke down in sobs. Her son had died a few months ago, after selling his rickshaw to pay for his medical bills, though the medicine didn't cure his fever. She was left with only her less loyal son and his treacherous wife who had turned her out.
I tried to talk to her about government safety nets for the elderly but she was only interested in telling me about her departed son. She wanted money to hold a milad for him.  She wept not for her unfortunate state but for her bleeding heart. This reminded me that poor or not, the one thing we treasure most is our children. For them we want good health care, education and a fair chance at a fine life.
I'd like to expand this discussion to encompass not just Barisal but the rest of Bangladesh where similar problems are faced. There are approximately 15 million extremely poor women in Bangladesh. Extremely poor women across our country face many more challenges than men. Women and children are the first victims of natural calamities because women tend to bear the responsibility of protecting family assets (though they don't have any power over these assets).
The burden of collecting water, often from distant wells, usually falls on women. Food distribution within households tends to deprive women. Girl children tend to be neglected more often. Domestic violence is a weapon used to strip women of power. This is not a family matter but a social crime. The silence needs to be broken.
There are 36 laws to protect women in Bangladesh but forming a policy is much easier than exercising it. To bring about changes in practice, to break through social beliefs and transform community ideologies, a vision and an action plan are needed.
What I learnt is that there are not too many efforts in place to economically empower girls in Barisal. A few asset-transfer initiatives led by NGOs try to provide extremely poor girls with suitable income generating assets so they can stay in school rather than succumb to the pressure to drop out and get married, but the choices are slim and there are endless layers of challenges to tackle.
Empowering girls in Barisal requires a holistic, systemic upheaval of power structures that prevent equality and equity. Without such measures, asset transfer programmes help relieve immediate financial pressure in these girls' lives but stand little chance of making sustained wide-scale transformations.
We need a paradigm shift. A revolution of sorts. And all actors in society need to engage. We have seen the great momentum created in Shahbagh and through the One Billion Rising campaign and other efforts recently. Youths are taking a stance to protect the values they believe in. If we continue to speak up, as women, for women, I believe we can bring about change. We can adopt national strategies to expand women's roles, enhance women's skills and ability to control assets, change beliefs and end violence against women and improve our country so it's a kinder home for Reema and millions of other girls like her.

The writer is Head of Advocacy at the Economic Empowerment of the Poorest.
E-mail: shazia@shiree.org.