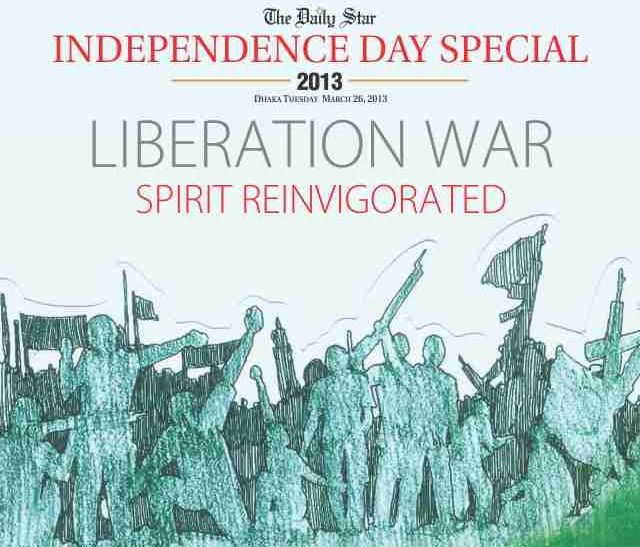 On this March 26, Bangladesh will be 42 and on the threshold of 43   years of its emergence as an independent nation. The memories of the supreme sacrifices made by the common people in the face of the scorched-earth policy of the marauding Pakistani occupation forces and their systematic genocide of unarmed Bengali populace on the eve of and during the liberation war make us sad and proud at the same. Sad, because of enormity of the tragedy that befell us. Proud, because of the courage with which they stood against the enemy. The  heroic struggles of our freedom fighters against the enemy, their sacrifices and finally their success in defeating the enemy  make us to hold our heads up high.
Among the heroes of the liberation war, there were many who fought with unparalleled valour, but their heroism and sacrifices remained largely unknown to us. Again, there were individuals who underwent immense sufferings but faced those with courage and dignity.
Side by side with the heroes, the liberation struggle had its local enemies, the collaborators of the Pakistan army--the Razakars, al-Badr, al-Shams etc. Taking advantage of the generosity of the first post-independence government, many of those accomplices of the occupation forces are still working against the people and our hard-earned independence. The silver lining is that they have been made to face trials at the International War Crimes Tribunal (ICT) for their crimes against humanity.
The post-independence era has not been one of unmixed joy and success. Politics remained turbulent and was interspersed with blood-stained periods when state power changed hands.  This impacted on governance negatively delaying the long-cherished dream of the people to build a prosperous society free from discrimination and exploitation.
Despite the lack of desired achievements on the political and governance fronts, the wheel of economy did not stop for a moment. Thanks to the relentless efforts of the persevering farmers in the fields, the toiling people in the factories, entrepreneurs in their business ventures and hardworking migrants workers, the nation continues  to thrive and forge ahead.
Attempt has been made in this year's independence supplement to honour the unsung heroes,the individuals who are yet to get  recognition in their social and professional lives even all these years after independence. The Daily Star's  42nd  Independence Day supplement has tried to highlight the indomitable spirit of those who never cowered in the face of adversities, but held the spirit of Liberation high all through.