Khaleda tells Bogra rally it 'would play role in due time', threatens to paralyse country
Rashidul Hasan, from Bogra 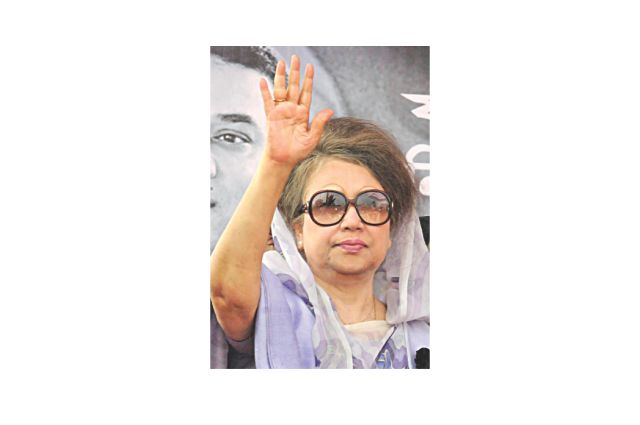 Opposition leader Khaleda Zia yesterday said the army would not play the role of “a silent spectator while people are getting killed” and that it would “play its role in due time”.
She said members of the armed forces would not be picked for peacekeeping missions if there was unrest in Bangladesh. “But if there was no peace in Bangladesh, foreigners would then say that the army is not capable of maintaining peace in other countries.”
Speaking at a rally at Matidahali intersection in Bogra on her way to Joypurhat, she said, “The army is a part of our country and therefore it has responsibilities towards it.”
Citing police firing during the violence between February 28 and March 3, which left 18 people dead in Bogra and Joypurhat, the BNP chairperson said, “I thank the army personnel as they went out on the roads [of Bogra] on that day [March 3] but did not open fire on people like the police had done.”
Khaleda said if necessary, the country would be crippled in order to oust the Sheikh Hasina-led “most autocratic, bloodthirsty, killer and most corrupt government”.
She said her party would declare fresh agitation programmes today to oust the government as well as to “save the people of the country”. The fresh agitation would start after March 26, she added.
She urged all to ensure success of the programmes through spontaneous participation.
The BNP chief said, “The prime minister must be brought to book and she [Hasina] must be made accountable for the killing of people and for the BDR carnage.
“She [Sheikh Hasina] thinks she will cling to power at any cost or flee. We are hearing many things … we have all the documents related to your [Hasina] widespread corruption and killings … where will you go? You will be tracked down in any corner of the globe and you will be put in the dock.”
On Saturday afternoon, Khaleda left Dhaka on a two-day visit to Bogra and Joypurhat. She plans to visit the bereaved family members of people who died during the violence.

The violence erupted after the international crimes tribunal on February 28 sentenced Jamaat-e-Islami leader Delawar Hossain Sayedee to death for crimes against humanity. Jamaat is a key ally of the BNP-led 18-party opposition alliance.
On her way to Bogra and Joypurhat from Dhaka, Khaleda did not have any reception from her party followers, as the BNP was observing a three-day period of mourning for late president Zillur Rahman.
There were no arches on the roads she travelled through.
The BNP chief yesterday also addressed rallies at Shalaipur High School playground at Panchbibi upazila in Joypurhat and Araibazar at Shahjahanpur upazila of Bogra.
She also visited a temple at Gabtoli upazila in Bogra. The temple was vandalised during the violence.
The opposition leader handed over Tk 1 lakh to each of the families of the 12 deceased and directed local BNP leaders to provide all kinds of assistance to those who had been injured in the violence.
Apart from BNP activists, a large number of leaders and activists of the Jamaat-e-Islami and pro-Jamaat student body Islami Chhatra Shibir attended Khaleda's rallies.
At the rally on Shalaipur High School playground, she said the government was on the brink of collapse and could be ousted with a nudge. "It's now a matter of time," she added.
Alleging that people of no community or religion are safe as long as Awami League is in power, Khaleda said, "More than 174 people were killed within a span of just 15 days, which has been internationally termed as genocide. This government must be tried for committing crimes against humanity."
The BNP chief said the leaders of Awami League would be brought to the court with fetters on, just as the government had treated the opposition alliance's senior leaders.
She called upon people of all profession, including civil administration and police department, to join the mass people.
"People's movement will definitely win and none will be able to resist it. Weapons, bullets and bombs will be of no use when people wage a movement," she said, adding, "We will no longer shed tears. Instead, we will create stronger resistance. Bogra will be the door of the movement."
Khaleda said the government had stopped bus and launches during the opposition's earlier "Dhaka Cholo" [March to Dhaka] programme.
Addressing the rally, she said, “But if necessary, you will again go to Dhaka and this time you will return home ousting the government.”
During the speech yesterday, the BNP chief refrained from directly accusing police of killing people which she did during her visit to Manikganj on March 16. Instead, she accused the government of committing "genocide" during the recent violence.
“Armed ruling party cadres are blending in with police so that police cannot act neutrally. We will not blame police [for attacking and killing people]. They act as per government directions,” she said.
In another rally at Ariabazar in Shajahanpur upazila of Bogra around 8:00pm, the former prime minister demanded that the army is deployed during the next polls, otherwise, she said, the election would not be free and fair.
She also claimed that the election commission was not acting independently and that it had redrawn the electoral constitution as per government instructions.
Earlier around 6:30pm, the BNP chairperson visited three temples at Bamunia and Sabekpara in Gabtali upazila. The temples were badly damaged during the recent violence in the areas.
In her brief speech at a roadside rally at Bamunia, Khaleda blamed the ruling party for the vandalism and announced to contribute 16 tonnes of rice to rebuild the temples.
BNP leaders including Moudud Ahmed, Selima Rahman, Sadeque Hossain Khoka, Mirza Abbas accompanied Khaleda in her Bogra-Joypurhat visit.
The BNP chief reached Bogra Saturday night and spent the night at the circuit house.
She left for Dhaka around 9:00pm.
Khaleda was scheduled to visit Bogra on Friday but she postponed the tour until yesterday to mark the three-day mourning on the death of president Zillur Rahman.