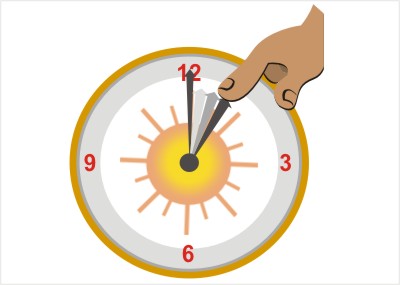 The daylight saving time (DST) will take effect at midnight on June 19, setting the clocks an hour ahead.
The decision came at a cabinet meeting chaired by Prime Minister Sheikh Hasina yesterday.
Briefing reporters afterwards, the prime minister's Press Secretary Abul Kalam Azad said the clocks will be put forward to 1:00am at midnight that day so people could have an extra hour of daylight.
It means offices and businesses will open and close an hour earlier than usual. The system is useful in that it cuts electricity need in the evening, he continued.
Like 70 other countries including the UK, US, Japan, France and Taiwan, Bangladesh is introducing the daylight saving time to save power, as it faces an acute shortage of energy in March-September.
During the period, the demand for electricity shoots up to 5,500 megawatts with average load-shedding ranging between 800 and 1,000 MW a day. Currently, the country produces around 3,800MW of electricity every day.
Azad said the extra daylight would help the power crisis ease off, given that it would be used effectively.
Replying to a query, he said the government has yet to decide how long the DST would be in force.
At yesterday's meeting, the cabinet asked all ministers, state ministers and secretaries to implement immediately the decisions taken in the last 23 sittings.
It also decided to suspend the recovery of agricultural loans in the areas hit by Cyclone Aila. Besides, the embankments and other infrastructure left battered by the storm will be reconstructed on an urgent basis.
The cabinet took 124 decisions till May 25. Of those, 67 have been fully executed, while work is underway to implement the rest.
During the same period, the cabinet has approved in principle 68 draft laws. Of those, 37 have been passed in parliament as 32 bills, and 11 others have been awaiting placement before the legislature. The remaining ones are going through review at ministries and divisions concerned.
At the meeting, the ministers and state ministers placed summary of their ministries' activities in the last six months.
The press secretary said the prime minister has expressed satisfaction with performance of the ministers and state ministers.
Meantime, she has assigned four ministers to supervise the relief and rehabilitation efforts in the Aila-hit areas.
Health Minister AFM Ruhul Huq has been assigned for Satkhira, prime minister's adviser Dr Mashiur Rahman and Khulna City Corporation Mayor Talukder Abdul Khaleque for Khulna, State Minister for LGRD Jahangir Kabir Nanak for Barisal and Bhola and State Minister for Religious Affairs Shajahan Miah for Patuakhali.
The other decisions taken by the cabinet yesterday includes one to keep the disaster management cells at ministries and upazilas open round the clock.
The prime minister also directed the party leaders and workers to stand by the cyclone victims.
Talking to The Daily Star about the meeting, Agriculture Minister Matia Chowdhury said they had decided to stop shrimp enclosures cutting coastal embankments. The shrimp farmers would be asked to use pipe to bring seawater, she added.
Food and Disaster Management Minister Abdur Razzaque told The Daily Star the government would not appeal for international aids to tackle the post-cyclone situation.
He said they are working to mitigate the sufferings of the people.