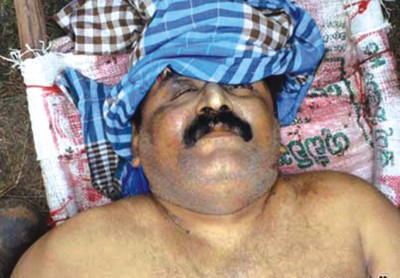 This handout picture released by the Sri Lankan Army yesterday is said to be the body of Tamil Tiger leader Velupillai Prabhakaran in Puthukkudirruppu in the north east of the country.Photo: AFP

Sri Lanka's president declared his country "liberated from separatist terror" yesterday as the military said it recovered the body of Tamil Tiger rebel leader Velupillai Prabhakaran from the battlefield on which he was slain.
The images were shown after the Tigers announced the guerrilla leader was still alive and well, and that they would continue fighting for a separate Tamil homeland despite President Mahinda Rajapakse's call to unite the nation.
Under international pressure to reach out to the Tamil minority, Rajapakse vowed in a nationally televised speech that "terrorism" had been defeated and that a political solution to the island's ethnic divisions would be found.
TV footage also showed a bloated body resembling the rebel leader, still dressed in a dark green camouflage uniform, laid out on a stretcher on the grass. A blue cloth rested on top of his head, apparently to cover a bullet wound. His open eyes stared straight up and his face appeared bloated.
"A few hours ago, the body of terrorist leader Prabhakaran, who ruined this country, was found on the battleground," army chief Gen. Sarath Fonseka told state television.
The death of Prabhakaran, the unquestioned leader of the Tamil Tigers, would make it far more difficult for the rebel movement to reform and continue its nearly three decade separatist war.
Speaking before the announcement, a rebel official abroad denied Prabhakaran was killed and said the Tamil Tiger leader was in a safe place.
With the war on the northern battlefields over, President Mahinda Rajapaksa delivered a victory address to parliament early Tuesday.
Recounting how the rebels, known formally as the Liberation Tigers of Tamil Eelam, once controlled a wide swath of the north and east, Rajapaksa said that for the first time in 30 years, the country was unified under its elected government.
"Our motherland has been completely liberated from separatist terrorism," he said, declaring Wednesday a national holiday.
The rebels, listed as terrorists by the US and European Union, had been fighting for a homeland for the mainly Hindu Tamil minority after decades of marginalisation at the hands of governments dominated by the mainly Buddhist Sinhalese majority.
Briefly addressing parliament in the Tamil language, Rajapaksa said the war was not waged against the Tamil people.
"Our intention was to save the Tamil people from the cruel grip of the LTTE. We all must now live as equals in this free country," he said.
Rajapaksa has said in the past he would negotiate some form of power-sharing with the Tamil community following the war and he alluded Tuesday to the need for an agreement.
"We must find a homegrown solution to this conflict. That solution should be acceptable to all the communities," he said. "That solution, which would be based on the philosophy of Buddhism, will be an example to the whole world."
He also called upon Sri Lankans especially Tamils who fled the country to return and help it rebuild.
"There are no minority communities in this country. There are only two communities, one that loves this country and another that does not," he said.
The war killed more than 70,000 people over the past quarter century. Another 265,000 ethnic Tamils were displaced in the recent offensive and many of them have been sent to overcrowded camps in the north.
The chubby Prabhakaran turned what was little more than a street gang in the late 1970s into one of the world's most feared insurgencies. At the height of his power, Prabhakaran controlled a virtual country in the north and a rebel army of thousands backed by artillery, a navy and a nascent air force.
He was also branded a terrorist abroad and his fighters waged hundreds of suicide attacks, including the 1991 assassination of former Indian Prime Minister Rajiv Gandhi, and forcibly recruited child soldiers.
A rebel official overseas, Selvarasa Pathmanathan, denied Prabhakaran had been killed.
"Our beloved leader Velupillai Prabhakaran is alive and safe. He will continue to lead the quest for dignity and freedom for the Tamil people," he said in a statement posted Tuesday on the rebel-affiliated TamilNet Web site. He offered no further details or evidence to support the claim.
With the rebels' conventional forces eliminated, many in Sri Lanka were waiting to see what concessions Rajapaksa was willing to make.
"Now (there) is a historic opportunity, and hopefully things will change. But the demonstrable record so far is not particularly encouraging," said Paikiasothy Saravanamuttu, a political analyst and executive director of the Colombo-based Centre for Policy Alternatives.
Though Rajapaksa promised political compromise, the defeat of the rebels leaves a vacuum in the Tamil leadership.
Prabhakaran killed many community leaders seen as a challenge to his authority. Others moved abroad, while many of those who remained active in politics either allied themselves with the government or were linked to the rebels and effectively sidelined.
The bloody end to the war, which reportedly killed thousands of ethnic Tamil civilians, could also complicate peace efforts.