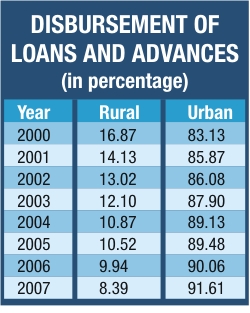 The percentage of bank lending going to rural areas has fallen by 50 percent during the past decade, despite concerted attempts by the government to increase access to credit in the countryside.
According to recently released data from Bangladesh Bank, bank advances to rural areas were 16.93 percent of the country's total advances in 1998, but fell to 8.39 percent at the end of December 2007.
While micro-credit institutions have been able to provide small loans in rural areas the failure of banks to reach out into the countryside and provide more sizable credit has been seen as a major factor for slow development.
Since the mid1990s, Bangladesh's banking sector has been growing considerably. Despite the boom and the government's efforts to increase access to finance in rural areas, rural financial markets have shrunk in relative terms, according the World Bank.
As a result, access to finance by micro, small, and medium-size enterprises and marginal, small, and medium-size farmers - the "missing middle" - remains limited. The WB regards this failure as significant as it terms these groups as the engines of growth in rural Bangladesh in terms of employment, contribution to GDP, and prospects for future growth.
Nearly 40 percent of the country's population live below the poverty line (less than $1 per day), according to government's Household Income and Expenditure Survey (HIES) 2005. Most of these poor people live in rural areas.
Government, the central bank and economists frequently say these people need easy access to finance to get a lift from poverty. But government and BB attempts taken so far have failed to provide the access to the rural population
In terms of opening of bank branches, BB rules say at least one in every five branches must be in rural areas to encourage bank business there. Some banks are opening more branches recently in rural than urban areas. For instance BRAC Bank has got permission to open 20 new branches this year, of which 15 will be opened in rural areas.
In the current fiscal year, the government set a target to disburse Tk 8,308 crore in agricultural credit through various banks and financial institutions. Till April 2008, some Tk 6,731 crore has been disbursed. The next year's target has been set at Tk 9,000 crore.
Mainly nationalized commercial banks, Bangladesh Krishi (Agriculture) Bank and Rajshahi Krishi Unnayan (development) Bank will disburse the money.
Zaid Bakht, research director of Bangladesh Institute of Development Studies (BIDS), said rural credit is limited to farm sector. However there are many non-farm sectors that need finance, he said.
“SME financing does not contribute to the rural manufacturing sector, it is being used mostly for trading purposes,” Bakht said.
He suggested: “Micro-finance institutions should come up with funds to finance small businesses.”