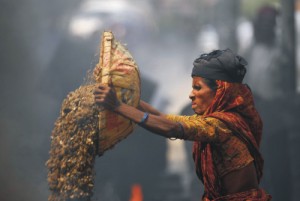 I am a terrorist?! Photo: Munem Wasif/ DrikNews

"They let us cook rice-daal for them, let us raise their children, trust us with the keys to house-home-jewelry. And then they turn around and vote for people who call us terrorists and want to cut us into pieces and bury us inside the ground."
-- Bangladeshi taxi driver in Delhi (author interview, 2005)

BOMB blast in Jaipur. Round up the usual suspects. Calling Abdul, Rahman, Rahim, Karim, Salim. All you "illegal" Bangladeshi immigrants within our borders. Report to the newest detention centers. It's not who you say you are, it's what we say you are.
Bangladesh has emerged as the all-purpose "Nondo Ghosh" (joto dosh) for Indian intelligence agencies. Attack on train station? Defused bombs? Bicycle bombs? Bag bombs? It must be the ultra-efficient, tentacle-spreading spectre of "terrorist organisations based in Bangladesh."
Within days, we are told that the "modus operandi" of the Jaipur blasts is similar to the Uttar Pradesh court blasts (November 2007), Hyderabad Mecca Masjid blasts (May 2007) and Malegaon blast (2006). Every bomb blast is similar to the one before. They are all connected, except when they aren't. Working on these leads, police are raiding Bangladeshi localities at Galta Gate, Baghrana, Ramganj, Subhash Chowk, and Bhatta Basti in Jaipur. Very convenient.
I remember the old days of Indian media hysteria about "Pakistani" militants. Bullet riddled bodies (the dead don't talk) and Pakistani passports (always in their pockets!). But Pakistan has become more complex, with its role in the US axis of the willing. Plus, the public wants new, fresh faces.
Some time in the last few years, it has become easier and acceptable to bring out the Bangladeshi "militant cell" bogey. That there is Islamist politics inside Bangladesh is not in question.
But that they have the capacity or agenda to wage cross-border forays -- this still needs to be proven. The proof always seems to come from shaky sources. The US has listed HuJI as a global-standard "terrorist organisation." And they have been so right, so many times before?
Of course, there are many Bangladeshi immigrants inside India. There will always be. The real question about Jaipur is -- who are these people in the "Bangali Para" -- what were they doing all this time? Working for middle class Indian families, of course.
Everyone in India knows exactly why these people are there -- to work. As household help, cleaners, sweepers, cooks, maids, taxi drivers, tailors, weavers, jewellery makers, construction workers. Keeping Shining Indian rolling along. Yesterday, they were your convenient and easy source of cheap labour. Why are they a problem today?
As India develops as a hyper-growth Asian tiger, with Bangladesh next door, immigration is inevitable. Until we become a medium growth country, we will be as a "Mexico" to India's "United States." Bangladeshis, hungry for work, willing to work, with families to feed, will cross the borders.
Only after we economically develop (a Saarc zone of "co-prosperity"?) will immigration flows reverse, like the Indians who are now returning from America and Europe, looking for opportunities in India.
Immigrants are ubiquitous in the daily lives of modern cities. In a megapolis like New York, they are the ones who drive taxis, sell newspapers and coffee, clean restaurant tables, and work in kitchens. As performers of these roles, they are intimately present in the physical space, but absent from consciousness.
Only when they are detained do they become hyper-visible as "sleeper cells." The majority of detention cases since 9/11 are banal: a taxi driver gets stopped for running a red light, and a routine check of his immigration papers reveals that he is "out of status." The case then gets accelerated if that person comes from one of the "suspect" countries.
The desire to identify "traitors" within borders has a long lineage. In America ("the immigrant nation"), the last century saw detention of Italian immigrants after anarchist bomb attack in 1919, jailing of German-Americans during WWI, internment of Japanese-Americans during WWII, execution of suspected Soviet spies Julius and Ethel Rosenberg, Joseph McCarthy's "Red Scare," the scapegoating of California Mexicans, and the rise of the border vigilante militia Minutemen.
W.E.B. Dubois's question to African Americans, "How does it feel to be a problem?" is now redirected and made freshly relevant for a new population.
When the Hyderabad blasts happened, we heard that intel was tracking phone calls to Bangladesh. What happened to that trail? Did the investigation go somewhere? If not, what about the public perception created about "dangerous" Bangladeshis? A few years ago, there was another Bangla "terror cell" splashed across Indian media. Again the story died out. The similarities to US media are eerie.
After Jaipur, Pankaj Singh, a senior Rajasthan police officer told the press: "The modus operandi, the way the bombs were manufactured and concealed in bags, is very similar to the way HuJI [Bangladesh] operates." I wonder what exactly made the trademark so easily spotted? Were the bags made of jute? Sealed with jackfruit juice? Lined with Nilkhet Bangla book pages? Now I hear that bombs of medium intensity planted on bicycles are a HuJI trademark? Really? It's an original and never-before-tried idea? The Viet Cong were using bicycle bombs against Americans in public spaces as far back as 1965. But oh bother, that's only history.
A previously unknown Islamic militant group, calling itself the Indian Mujahedeen, has actually claimed credit for the Jaipur bombing. But Indian intel still considers the Bangladeshis the prime suspect. Maybe I'm too sceptical. Maybe there is a HuJI link.
But doesn't it all seem a bit too convenient? Fitting too many agendas?
And why now?