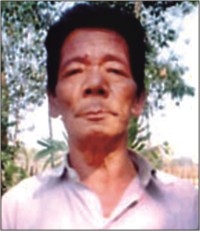 "We risked our life for the country's liberation but instead of getting recognition, we are ill-treated as aboriginal tribes," said indigenous freedom fighter Chin Sangma of Madhupur in Tangail.
The brave freedom fighter, who like many others of his community took part in the Liberation War, is now working at a rubber garden in Madhupur as a day labourer and find it difficult to meet both ends meet.
As this correspondent recently visited Chin Sangma's house at Dharati village, 20 kilometres from Madhupur upazila headquarters, he told the story of his joining the Liberation War.
"I was 35 during the Liberation War and I had wife and a son then. I worked as a farmer in my village."
Many people took shelter in the houses of indigenous people in Madhupur Garh area when the Pakistani occupation forces started massacre and some freedom fighters from Tangail set up a camp there in the end of May.
"I heard from them that the freedom fighters of Bangladesh are taking training in India. I decided to join the Liberation War.
"I along with Biren Sangma and Amolendra Sangma of my village went to Dhalu in Meghalaya in India through Nandina in Jamalpur on Ashar 10 (in Bangla calendar).
"After trainings for about a month, our group led by commanders Anis and Nuru attacked the Pakistani forces on Dhanua Kamalpur border.
"Later pretending to be a mad, I went near the Pakistan forces' camp and returned safely after a recce.
"We about 300 freedom fighters attacked the Pakistani camp at Dhanua Kamalpur and after a terrible fight for three days, the Pakistani forces fled, leaving huge arms and ammunition.
Twelve Pakistani soldiers died in the fight.
"I also took part in battles on behalf of Kaderia Bahini and after freeing Tangail from the Pakistani forces on December 11, I stayed at Bindubasini High School camp. Later I surrendered my arms to Bangabandhu Sheikh Mujibur Rahman at the school ground and returned to my village.
"Now at 70, I have to work as a day labourer for Tk 70 to Tk 80 per day for living.
"I joined the Liberation War with a hope to eradicate oppression and immoral practices but we the indigenous people are facing oppression and torture.
"We did not fight for such a country," said a lamenting Sangma.