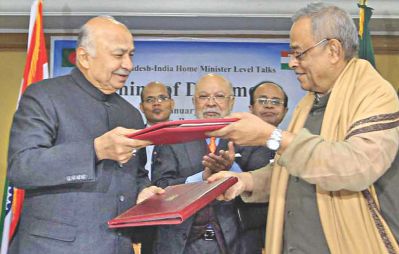 In a major breakthrough, Bangladesh and India yesterday inked Extradition Treaty to hand over the convicted and criminals hiding in each other's countries.

The deal, however, excluded the political asylum seekers, accused of political crimes and the offenders awarded with less than one year's jail term.
According to the agreement, those who are charged with murder, culpable homicide and other serious crimes would come under the purview of the deal.
Home Minister Mohiuddin Khan Alamgir and his Indian counterpart Sushilkumar Sambhaji Rao Shinde signed the agreement at the end of their bilateral talks. The dialogue also yielded a revised travel arrangement, through which Dhaka and Delhi have eased their visa regimes under several conditions.
"The agreements will enhance ties in the areas of securityâ€¦and people-to-people contact," said Alamgir and Shinde at a joint press conference after the deal signing at Ruposhi Bangla Hotel in the capital.
The extradition treaty will not, however, make way for instant deportation of Anup Chatia, jailed general secretary of United Liberation Front of Asom (Ulfa), as he had moved court seeking political asylum in Bangladesh on security grounds.
The Ulfa leader has been in jail since his arrest in 1997 on charge of entering into Bangladesh without valid documents. He has already served seven years in jail here and now is in safe custody as he sought political asylum.
The two countries also signed a landmark liberal visa agreement, Revised Travel Arrangements (RTA), yesterday. This will ease the visa regime and remove restrictions on visits of each other's tourists, businesspersons, journalists, professionals, officials and students, and those in medical and several other categories.
The Bangladesh-India 4th home minister-level talks issued a joint press statement that covered a large range of bilateral issues, mainly security and border related ones.
But there was no mention of the much-talked-about killing of Bangladeshis on the border.

In reply to a question regarding the border killing despite assurance from the highest political level of India, Shinde said, â€œThis killing should not take placeâ€¦such incident should not be repeated, that I agree. It has got to our notice."
The Indian home minister said his government had already instructed those who have come with the delegation that such incidents should not happen or be repeated in future.
About introduction of non-lethal weapons on the border, he said it was in the action and killing incidents had come down in some places where non-lethal weapons were being used.
Asked who would be extradited first under the extradition treaty, the Indian home minister said, "It would be between the governments of the two countries and names should not be disclosed in public at this moment."
Shinde said India would extend all-out cooperation to find the killers of Bangabandhu, if they were hiding in India, and hand them over to Bangladesh. Besides, he said, India would send back the Bangladeshi criminals hiding there.
"We have just signed the extradition treaty and the revised travel arrangement. I am proud to declare that India and Bangladesh shall embark on a new path of cooperation following the signing of extradition treaty and the RTA.
"These pacts will reinforce the sprit of friendship and partnership between our countries in the area of securities and cooperation, and increase people-to-people contact," he said.
Mohiuddin Khan Alamgir said Bangladesh would be benefited more through the treaty, as the number of Bangladeshi criminals hiding in India is greater than that of Indian criminals absconding in Bangladesh.
"According to the treaty, India will be able to bring back less number of criminals compared to the number of criminals we will be able to bring back."
On extradition of Anup Chatia, the Bangladesh home minister said, "The person you have mentioned has sought or filed an application with the Supreme Court of Bangladesh seeking political asylum. As soon as it is settled by the court, we will decide whether to treat this person or other persons under this extradition treaty or in some other way," said Alamgir.
In the meeting, according to the joint statement, the Indian side appreciated Bangladesh for extending cooperation for addressing the security concerns of India, particularly in dealing with the Indian insurgent groups. Both the sides reiterated their commitment to act against the elements inimical to the two countries.
The two sides agreed to allow development work within 150 yards of the zero line. They expressed satisfaction at the smooth operation of Coordinated Border Management Plan and agreed to increase the number of coordinated patrolling with a view to curbing criminal activities along the border.
During the meeting, Dhaka and Delhi also agreed to intensify further the activities of various nodal-points in different areas of cooperation, such as human trafficking, drugs and Interpol, etc.
They discussed the ratification of the Land Boundary Agreement, 1974 by the Indian government as well as the protocol signed in 2011 and noted that early ratification of the same would pave the way for implementation of the provisions of the agreement and lay the long-pending boundary related issues resolved.
In yesterday's home minister-level meeting, Alamgir led an 18-member delegation comprised of State Minister for Home Shamsul Haque Tuku, Prime Minister's Adviser on International Affairs Gowher Rizvi, Bangladesh High Commissioner to India Tariq A Karim, Home secretary CQK Mustaq and other high officials of different ministries.
The Indian Home Minister led a 15-member delegation, including High Commissioner of India to Bangladesh Pankaj Saran and high officials from different ministries.