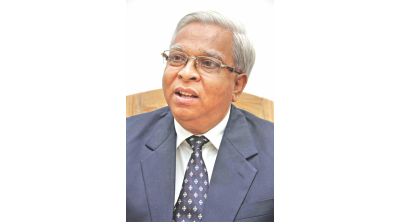 International Crimes Tribunal-1 Chairman Justice Md Nizamul Huq resigned yesterday amid controversy over the leak of his Skype conversation with an expatriate Bangladeshi legal expert.
Justice Huq mentioned â€œpersonal reasonsâ€ for his resignation, State Minister for Law and Justice Quamrul Islam told The Daily Star yesterday evening.
His resignation would not hamper the proceedings at the tribunal set up in 2010 to try the cases over crimes against humanity, said sources concerned.
They said the tribunal would continue with the proceedings while a successor to Justice Huq is appointed.
Meanwhile, the main opposition BNP has called for trial of Justice Huq for â€œmisdeedsâ€, and Jamaat-e-Islami, the top brass of which are under trial at the two war crimes tribunals, wants dissolution of both the courts.
Tribunal-1 is dealing with four cases -- one each against former Jamaat chief Ghulam Azam, Jamaat chief Motiur Rahman Nizami, Nayeb-e-Ameer Delawar Hossain Sayedee and BNP leader Salauddin Quader Chowdhury.
The trial of Sayedee's case is awaiting judgement.
According to section 6 (4) of the International Crimes (Tribunals) Act, 1973, the government could now declare the office of the Tribunal-1 chairman vacant and appoint a new judge.
As per the act, the government could do this "If any member of a tribunal dies or is, due to illness or any other reason, unable to continue to perform his functions".
Law Minister Shafique Ahmed told The Daily Star that a new judge was likely to be appointed today but the government was yet to decide who would be the new judge.
He too said the resignation of Justice Huq would not hamper the trial proceedings at the tribunal. As per the law, Tribunal-1 judges would continue with the proceedings of cases and that Justice Huq would return to his office of a High Court judge, he said.
Section 6 (6) of the act reads, "A tribunal shall not merely by reason of any change in its membership or the absence of any member thereof from any sitting, be bound to recall and re-hear any witness who has already given any evidence and may act on the evidence already given or produced before it".
The new judge might take some time for studying the cases to get up to speed, said the minister.
Justice Huq handed the registrar of the tribunal his resignation letter addressed to President Zillur Rahman.
The registrar later sent it to the law ministry for forwarding it to the Bangabhaban through the Prime Minister's Office today.
The controversy surrounding Justice Huq began after Bangla national daily Amar Desh published â€œtranscript of Skype conversationâ€ of Justice Huq with expatriate Bangladeshi Ahmed Ziauddin, a law expert on international crimes.
The newspaper said it had collected the records of the conversation from a source abroad.
In the â€œtranscriptâ€ of the conversation, Justice Huq was judgemental of a number of legal experts of the country and people involved in the crimes against humanity cases, according to Amar Desh.
On December 6, two days before the paper began publishing the â€œtranscriptâ€, the three-member Tribunal-1 led by Justice Huq in an order said Justice Huq's email and Skype accounts along with his computer had been hacked.
In the order, it was revealed that British magazine The Economist had in its possession the correspondence between the tribunal chief and the law expert based in Brussels.
Justice Huq in the order had also said he occasionally discussed developments on international criminal law with Ahmed Ziauddin, who is an expert in that field.
Justice Huq also said the International Crimes (Tribunals) Act, 1973, was a new law. To understand the law, it was necessary for the judges to look into the process and orders of different tribunals and consult with experts.
He said he has had the privilege of consulting with Ahmed Ziauddin.
After the Bangla daily published the â€œtranscriptâ€, the content of the
â€œtranscriptâ€ became an issue of debate and pro-BNP and -Jamaat lawyers demanded Justice Huq's resignation on Monday.
The BNP yesterday demanded trial of Justice Huq and said he has to face trial in future for his â€œmisdeedsâ€.
"The government has tainted the judiciary and everything that he [Justice Huq] has done was criminal offence. He had no way but to resign. But he has to face trial," BNP standing committee member MK Anwar said at a press briefing at the party's central office in Nayapaltan.
Jamaat-e-Islami said it would now raise the demand for total scrapping of both the tribunals.
Matiur Rahman Akanda, assistant publicity secretary of Jamaat, told The Daily Star last night, â€œAfter the scrapping of the tribunals, the government will have to start the legal process to amend the International Crimes Tribunal Act and make it of international standards.â€
Giving his reaction to Justice Huq stepping down, Matiur said, â€œOur allegation against Justice Nizamul Huq that he is a partisan man has been proved right. And we will now go for the demand of total scrapping of the tribunals.â€
The party would also call for hartal-like programmes if the government did not meet their demands, he added.
Meanwhile, a law ministry official requesting anonymity told The Daily Star that the ministry would ask the Supreme Court for a High Court judge to replace Justice Huq.
Getting a name from the Supreme Court, the ministry would place it before the president, via the Prime Minister's Office, and the president would appoint the new judge.
Tribunal-1 is set to deliver the verdict on the case against Sayedee. It is now recording the testimony of the first defence witness in the case against Ghulam Azam.
So far, 16 prosecution witnesses testified and were cross-examined in the case against BNP leader Salahuddin Quader Chowdhury.
The tribunal recorded testimony and cross-examination of one prosecution witness in the case against Nizami.
Resignation of a war crimes tribunal judge is not unprecedented. In recent times, two judges in the Khmer Rouge war trials in Cambodia have stood down.