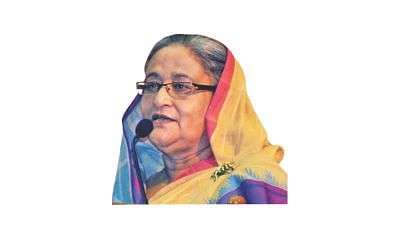 Prime Minister Sheikh Hasina yesterday castigated the Transparency International Bangladesh for publishing a survey report on lawmakers, terming it "ill-motivated".
She also questioned the timing of the report, as her government has only one year of its tenure left. The TIB had published a similar report ahead of the 2001 election, Hasina recalled.
The premier's comments came a day after the TIB report said 97 percent of the 149 sitting MPs surveyed were involved in "negative activities" while 70 percent of them were engaged in "criminal activities". Of those surveyed, 53.5 percent MPs carried out criminal activities in person.
Talking to her ministers after the weekly cabinet meeting, Hasina said the report was not correct, meeting sources told The Daily Star, adding that a number of ministers and state ministers echoed the prime minister's view.
"What is the motive behind publishing this report at a time when an expert panel of the World Bank is visiting Bangladesh?" a meeting source quoted Hasina as saying.
The prime minister also wondered about the expert panel's meeting with eminent jurist Dr Kamal Hossain and a few others on Sunday.
Contacted, TIB Executive Director Iftekharuzzaman yesterday said, “Yes it [the survey] is motivated. But the motive is to strengthen the country's democracy.
"The purpose of this report is to draw attention to the existing gaps [between lawmakers] so that the MPs have the opportunity to review their own role and to improve their democratic practices and performances as desired by the people.”
But Agriculture Minister Matia Chowdhury said the TIB report was aimed at impeding democracy and "inviting" undemocratic forces.
“They [TIB] want to weaken the foundation of the democracy through publishing this kind of motivated report and invite some other system,” she said.
“Why has the TIB come up with this kind of report now? What is its motive?" Matia asked, adding that the TIB had also published a motivated report in 2001.
Earlier on Saturday, Hasina referred to the 2001 TIB report that labelled Bangladesh as the most corrupt country in the world. The report was completely fabricated and it was published in June that year (the AL was in power till July 13, 2001) to mislead the people, the prime minister said, adding that it was published to prevent her party from coming to power.
Talking to The Daily Star, Matia yesterday asked the TIB to publish the names of the corrupt MPs. She alleged a top official of the TIB took the initiative of the survey having been failed to participate in the 2008 parliamentary election. She, however, did not name the TIB official.
Matia, a presidium member of the AL, also questioned TIB's taking foreign fund to publish reports against democracy.
“It is funny how the TIB calls into question the democracy with foreign money,” she said, asking where the anti-graft body had been during the last military-backed caretaker government.
Worker's Party lawmaker Rashed Khan Menon said the way the TIB did the survey was not acceptable at all.
According to him, the purpose of the study was to erode people's confidence in MPs and parliament, thus hindering the progress of democracy.
Rejecting the TIB report outright, AL Joint General Secretary Mahbubul Alam Hanif said, "This survey report has been published to encourage those who want to see unelected government in power."
AL MP Tarana Halim said there were many contradictions in the TIB report. People would get a wrong message about all lawmakers from the report, which she said was misleading.
The TIB should not have published such an "incomplete report", she added.
BNP Standing Committee member Moudud Ahmed said the TIB report reflected "exactly what we were saying about the ruling party lawmakers".
Dhaka University Vice-Chancellor Prof AAMS Arefin Siddique said people expected the lawmakers to remain above all kinds of corruption and misdeeds. But he added that the TIB should explain to the people the survey methodology.
Of the 149 lawmakers surveyed by the TIB, 141 are male and eight female while 136 are treasury bench lawmakers (27 ministers or state ministers) and 13 opposition lawmakers. The surveyed MPs were not named in the report.