Fired with a dream 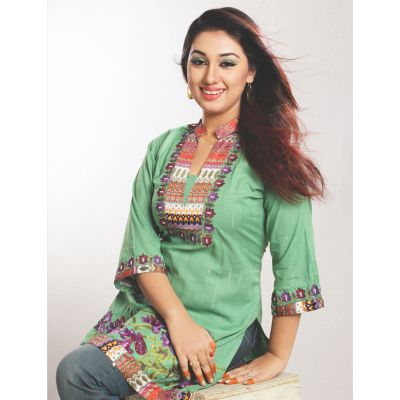 Apu Biswas first arrived on the silver screen with a small role in the 2005 movie “Kaal Shokale”. It didn't take her long to make a name for herself, as offers to play the leading lady in many films came flooding in. Her on-screen pairing up with Shakib Khan also acted as a catalyst for her rapid success in the Dhaliwood scene. Talent and hard work paid off, as Apu is now considered the top movie actress of today.
During her seven-year career, Apu has paired up with Shakib in nearly 40 movies -- all of which have been box office successes. The actress claims that the popularity and the repeated commercial success of the Shakib-Apu pairing have influenced producers and directors to cast them in so many films.
The actress however claims that a sole individual cannot claim the entire credit for all the successes. Admitting that Shakib has a huge appeal to movie-goers, Apu asserts that it takes a united effort to make a movie a success.
Several films featuring her are waiting to be released, the most talked about of which is “Debdas”. The role of Parbati will be played by the actress, while the eponymous role will be played by Shakib. Apu says she is very optimistic about the success of “Debdas”, adding that she expects large crowds to throng the halls when the film is released.
The last Eid saw only one release featuring Apu -- “Dhakar King”, directed by Safiuddin Safi. Speaking about the movie, Apu says that she has only received good reports on “Dhakar King” so far. “People close to me are calling me with positive reviews of the film,” Apu says, adding that her dedicated fans all went to watch the film. “I went to a theatre to watch the movie on the second day of Eid, but had to came out after an hour due to the huge crowd inside the hall,” adds Apu.
The star feels that an actress should only have a single release during a major festival like Eid -- to ensure that it is a commercial success. Two films featuring Apu may be released during Eid-ul-Adha: Badiul Alam Khokon's “100 Percent Love” and MB Manik's “Durdhorsho Premik”. “Debdas” may also be released around that time, she adds.
Apu is currently working on several films. She has penned agreements for Nazrul Islam Khan's “Moner Thikana” and three more untitled projects. Asked on her dwindling film projects, Apu answers that all actors are getting less film assignments as fewer movies are made annually. Only 40 movies are now made each year, compared to a 100 that were made before, she adds.
A constant dreamer, Apu likes to plan ahead. Her plans for the future include working in films with good plots, so that her place is cemented in the hearts of the audience.
Despite her busy shooting schedule, Apu makes time to go to the gym 10 days a month. She claims that she has been able to make significant changes with better care of her health.
When asked for her opinion on the recent changes in the trend of movie plots, direction and audience expectations, Apu says that the viewers want something fresh, as they are tired of the same locations and storyline. “Such expectations are natural,” Apu claims.
The star further points out that her greatest gain from the film industry is the love of her countless fans. Such admiration has come her way solely by working in films, Apu concludes.