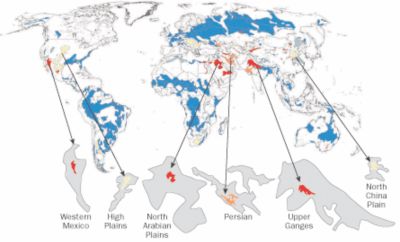 A handful of thirsty countries are guzzling their groundwater reserves much faster than those resources can be renewed.
India, Pakistan, Saudi Arabia, Iran, Mexico, and the United States lead the global pack of water-thirsty nations, researchers report online August 8 in Nature. Irrigation for agriculture drives much of the demand, says hydrogeologist and study coauthor Tom Gleeson of McGill University in Montreal.
He and colleagues devised a new "groundwater footprint" measure to evaluate the sustainability of withdrawals from the world's aquifers. The analytic tool balances water coming in with water going out, and gauges how large an aquifer would have to be to accommodate current withdrawals. A groundwater footprint larger than its aquifer means people are sucking down water faster that it can be replenished treating it as a nonrenewable resource, Gleeson says.
Though 80 percent of the world's aquifers have sustainable footprints, people drawing on other aquifers are draining the world's water supply. For these overtapped reservoirs, groundwater footprints vastly exceed aquifer areas. "It's not sustainable," Gleeson says. "We don't know how long the aquifers will last."