Why are Rohingyas fleeing? | The Daily Star
Skip to main content
বাংলা T

Why are Rohingyas fleeing? 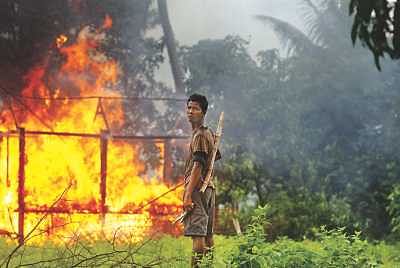 Myanmar is mainly a Buddhist country with a population of 64 million. Rohingyas Muslim population is 800,000 in Rakhine state. Both Muslim and Buddhist live side by side with Buddhist in majority.
The Muslim population is merely 4%. Myanmar has always been skeptical about Muslims. Even before the military took power in 1962; the U Nu government in the 1950s made Buddhism the state religion and expelled the Burma Muslim Congress, as part of a chauvinist campaign to drive Indians out of Burma.
The Myanmar military has formally denied citizenship to the Rohingya since 1982, declaring them illegal immigrants from Bangladesh. The Rohingya are not included among the country's earmarked 135 ethnic groups. They are not permitted to travel outside Rakhine or their own land, and often suffer extreme poverty.
Rohingyas live in fear and with low moral for being considered as stateless people and illegal immigrants from Bangladesh.
According to Amnesty International, the Muslim Rohingya people have continued to suffer from human rights violations under the Myanmar junta since 1978 and many have fled to neighbouring Bangladesh as a result:
"The Rohingyas' freedom of movement is severely restricted and most of them have effectively been denied Myanmar citizenship. They are also subjected to various forms of extortion and arbitrary taxation; land confiscation; forced eviction and house destruction; and financial restrictions on marriage. Rohingyas continue to be used as forced labourers on roads and at military camps, although forced labour in northern Rakhine State has decreased over the last decade."
"In 1978, over 200,000 Rohingyas fled to Bangladesh, following the 'Nagamin' ('Dragon King') operation of the Myanmar army. Officially, this campaign aimed at "scrutinising each individual living in the state, designating citizens and foreigners in accordance with the law and taking actions against foreigners who have filtered into the country illegally." This military campaign directly targeted civilians, and resulted in widespread killings, raping and destruction of mosques and further religious persecution."
"During 1991-92, a new wave of over a quarter of a million Rohingyas fled to Bangladesh. They reported widespread forced labour, as well as summary executions, torture, and rape. Rohingyas were forced to work without payments by the Myanmar army on infrastructure and economic projects, and often under harsh conditions. Many other human rights violations occurred in the context of forced labour of Rohingya civilians by the security forces."
In 1939, The British authorities, who were wary of the long-term hostility between the Rakhine Buddhists and the Rohingya Muslims, formed a special Investigation Commission led by James Ester and U Tin Htut to study the issue of Muslim immigration into the Rakhine state. The commission recommended securing the border; however, with the onset of World War II, the British retreated from Arakan.
The recent sectarian violence that broke out last May between Rohingya Muslim and Buddhist communities have cost the lives of at least 16 Muslims and 13 Buddhists, seen 2,600 homes torched and forced 32,000 people to seek refuge in 37 camps across the state.
The cause of the violence is mainly because of the rape and murder of a Rakhine Buddhist by three Rohingyas Muslim men. The June 3 incident set off revenge attacks and the violence soon stepped up, beginning in Maungdaw but quickly spreading to the state capital Sittwe and nearby areas and fleeing of Rohingyas in large numbers by boat to Bangladesh.
President Thein Sein sent troops into Rakhine and claimed to have imposed order. He warned the communal violence might derail his government's "reform" program. His regime has used the NLD's participation in by-elections during April to good effect, with both the European Union and the US suspending economic sanctions on Myanmar, opening the possibility of Western investment.
The Obama administration has been central to this developing rapprochement. Washington is seeking to re-engage with Burma as part of its aggressive campaign to lessen Chinese political and economic influence in Asia. The Burmese regime wants to decrease its heavy reliance on China by attracting American and European investment -- a plan fully backed by Suu Kyi and her NLD.
Anti-Rohingya chauvinism is not confined to the military. A New York Times article cited opposition figure Ko ko Gyi, who insisted that Rohingya statelessness was not Myanmar's problem but had to be solved by the "international community." "Anybody who wants Myanmar (Burmese) citizenship will have to learn one of Myanmar's languages and learn about our culture," he said.
Some come mentators have suggested the military might have provoked the current violence as a means of forcing opposition leader Suu Kyi to issue a statement in support of Rohingya citizenship that could open divisions in NLD. While military involvement cannot be ruled out, the government is unlikely to encourage ethnic and communal violence, as it is seeking to ease tensions with the West.
The NLD has ruled out a making statement on the Rakhine conflict, saying it did not want to inflame the situation. Asked about the issue after addressing the International Labour Organisation in Geneva, Suu Kyi was evasive, but implied the Rohingya were illegal immigrants and urged tougher border measures.
"We need very clear and precise laws with regard to citizenship to begin with… I think one of the greatest problems comes from the fear on both sides of the border -- that is Bangladesh and Burma -- that there will be illegal immigrants crossing all the time and this is due to the porous border. I think we need more responsible, incorrupt border vigilance," she said.
By refusing to take a stand for granting citizenship rights and focusing on "illegal immigrants," Suu Kyi is helping to fuel anti-Rohingya prejudice. Her attitude to this oppressed minority underscores Suu Kyi and the NLD represent the interests of a dissident section of the Myanmar ruling elite, not those of working people.
It is unfortunate that now, such sectarian conflict is a bad omen for Myanmar, when the potential western investors eyeing for investment in that country.
Perhaps with such prospective signs in the horizon Myanmar needs to mellow its militarised environment attitudes towards Rohinghyas.
The writer is a Columnist and Researcher.