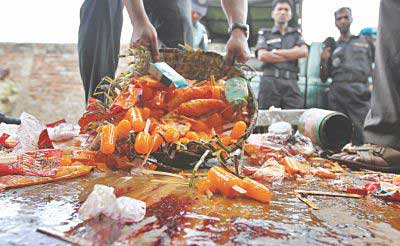 A mobile court destroys ice creams made by â€œFantasy ice cream factoryâ€ at South Bakalia of Chittagong city yesterday. The court sealed off the factory and fined Tk 50,000 for using industrial dye and harmful chemicals in the ice creams. Photo: Anurup Kanti Das

A mobile court yesterday fined an ice cream factory in Chittagong city Tk 50,000 and sealed it for two months on charge of using textile dye and harmful chemicals.
It also destroyed the leftover raw materials and ice creams worth around Tk 2 lakh and disconnected the power supply to the factory.
Based on a tip-off and a photo feature published in The Daily Star on May 29 under the headline “ICE crime” on factories of the port city producing ice creams using harmful ingredients in unhygienic environment, the mobile court conducted a raid in Fantasy Ice Cream Factory in South Bakalia area, said Executive Magistrate Jainal Abdin, who led the drive.
The Daily Star took photos for its feature from this factory.
The court was assisted by Rapid Action Battalion (Rab-7) and KM Hanif, assistant director of Bangladesh Standards and Testing Institute (BSTI), Chittagong.
KM Hanif said the owner of the factory had been using unsafe water, toxic sodium cyclamate for sweetening the ice creams, textile dye for colour and banned ingredients for flavours.
These ice creams can cause diseases like diarrhoea, cholera and dysentery, he added.
Contacted, owner of the factory Md Aminul Islam, 28, confessed to using harmful chemicals to make ice creams. He has given an undertaking to the mobile court on not using such ingredients in future, said the executive magistrate.