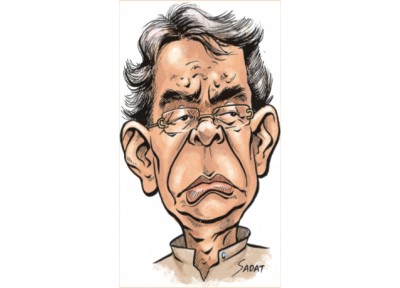 In a dramatic move, the government yesterday made Suranjit Sengupta a minister without portfolio, just a day after he stepped down as railway minister amid the railwaygate scandal.
The government issued a handout in this regard yesterday but it neither said anything about Suranjit's announcement of resignation nor rejected media reports that he had been made to quit.
"With the authority vested in her under article 3 (IV) of the Rules of Business 1996, the prime minister has appointed Suranjit Sengupta as minister without portfolio, relieving him of the charge of the railway ministry," said a Press Information Department handout last night.
A minister without portfolio holds charge of no ministry but enjoys all facilities of a minister, and can be given a portfolio whenever the prime minister wants.
Contacted by The Daily Star, Communications Minister Obaidul Quader explained the government's change of heart in such a short time.
"He [Suranjit] was neither accused nor found guilty in the cash recovery incident. He was relieved of his charge by the prime minister to ensure a fair and transparent investigation. There is nothing wrong in it," he told The Daily Star last night.
Mahbubul Alam Hanif, joint general secretary of the ruling Awami league, echoed his views.
"The graft allegation against him [Suranjit] does not go with his 55-year political career. Considering this, making him a minister without portfolio is befitting," said Hanif.
And amid all these twists over Suranjit's fate, the railway ministry was without a minister yesterday.
The ministry was formed in December last year through splitting the communications ministry into two.
Barely five months into taking over as railway minister, Suranjit at a crowded press briefing on Monday announced he was stepping down in light of his discussion with the prime minister the night before.
“At the meeting with the prime minister on Sunday night, I told her that I wanted to relieve myself of the charge of the railway ministry, and she happily accepted it,” a pale-looking Suranjit had told the press briefing at the Rail Bhaban.
He also took "full responsibility" for the railwaygate scandal surrounding the recovery of Tk 70 lakh form the microbus of his now-fired assistant personal secretary on the night of April 9.
The money is said to have been part of the bribe taken from railway job seekers, and the microbus carrying Omar Faruq Talukder, the sacked APS, and two other top railway officials was headed for Suranjit's Jigatola residence.
The two railway officials are now-suspended general manager (East) Yusuf Ali Mridha and suspended Dhaka division security commandant Enamul Huq.
Driver Ali Azam Khan drove the vehicle into the BGB Pilkhana headquarters in the capital, having been refused Tk 5 lakh as a share of the amount, sources told The Daily Star.
The four men were kept in BGB's custody that night.
The BGB claimed to have freed them all the next day, but Enamul told this paper after his release that the border force had not freed Azam.
Azam has remained untraced since. Contacted by The Daily Star, his family could not say anything about his whereabouts since the scandal surfaced.
Meanwhile, more than a week into the sensational railwaygate scam that led to Suranjit's resignation, the police have neither filed any case in this connection nor launched any drive to trace Azam.
Inspector General of Police Hassan Mahmood Khandker said his force did not move as no complaint had been lodged in this regard.
“We'll take steps if the family members of the missing person or the probe bodies formed in this connection request us to find him," he told The Daily Star yesterday.
Today, the Anti-Corruption Commission is set to interrogate Mridha and Enamul about their involvement in the scandal.
The anti-graft body summoned them to appear before a three-member committee formed yesterday to probe their role and also that of Faruq in the incident.
Meanwhile Enamul yesterday submitted his written statement on his involvement in the scam before the railway DG-led probe body.
Enamul, who had earlier told The Daily Star on record that they had been going to Suranjit's house, yesterday made a U-turn.
“The general manager asked me to accompany him for security reasons, but I didn't know where we were headed,” he told reporters at the Rail Bhaban after his appearance before the committee.
On why the GM needed security that night, he said he had not asked the GM about that. “He is a senior officer and can ask for security.”
Asked about the scandal, he said, “I had no idea about the money being carried by the vehicle. I did not see any bag inside the car.”
He said the BGB personnel kept the four of them in a room and freed them around 9:00am on April 10. “An acquaintance of Faruq drove the microbus out of the BGB headquarters, leaving the driver in the custody of BGB personnel.”
VISIT TO PILKHANA
The two-member probe body headed by Railway DG Abu Taher will soon visit the BGB headquarters and talk to the BGB personnel who were on duty on the night of April 9.
“We've already communicated with the home ministry in this regard,” said Abu Taher, hoping to complete the investigation within 15 days.
BNP CONDEMNS
The opposition BNP has strongly condemned the appointment of Suranjit as a minister without portfolio, saying this will impede an impartial investigation into the railwaygate scandal.
Reappointing a minister who has resigned proves that the government and the entire state machinery have become corrupt, said party acting secretary general Mirza Fakhrul Islam Alamgir at BNP chief Khaleda Zia's Gulshan office last night.