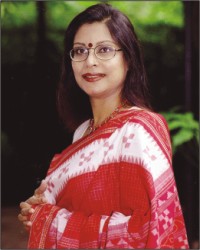 Noted Tagore singer Rezwana Chowdhury Bonya recently did playback for Indian filmmaker Rituporno Ghosh's upcoming Bengali film Shob Choritro Kalponik. Bonya also makes a brief appearance on screen -- singing the song, E porobashey robey ke.
The film features a memorial programme held for a recently deceased poet. The protagonist of the film is played by popular Tallywood actor Prasenjit. Bollywood star Bipasha Basu will don the role of the deceased poet's wife. Poet Joy Goswami will also be seen doing a cameo.
Rezwana Chowdhury Bonya is quite popular in West Bengal. She frequently performs in programmes for several Bengali TV channels in India. Every year, different audio companies there release her albums as well.
“When Rituporno Ghosh asked me if I would sing for his film, I thought to myself, why not? It was a new experience for me, and I quite enjoyed it,” said Bonya.
“In Bangladesh, I did playback for the film Shasti, directed by Chashi Nazrul Islam,” the artiste added.
Are more playbacks on the cards? “If it is a Tagore song, I might consider it,” Bonya smilingly answered.