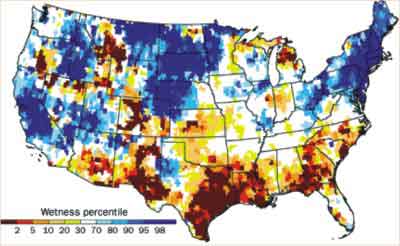 Groundwater levels have dropped in many places across the globe over the past nine years, a pair of gravity-monitoring satellites finds. This trend raises concerns that farmers are pumping too much water out of the ground in dry regions.
Water has been disappearing beneath southern Argentina, western Australia and stretches of the United States. The decline is especially pronounced in parts of California, India, the Middle East and China, where expanding agriculture has increased water demand.
"Groundwater is being depleted at a rapid clip in virtually of all of the major aquifers in the world's arid and semiarid regions," says Jay Famiglietti, a hydrologist at the University of California Center for Hydrologic Modeling in Irvine, whose team presented the new trends December 6 at a meeting of the American Geophysical Union.
Famiglietti and his colleagues detect water hidden below the surface using the modern equivalent of a dowsing rod: a pair of car-sized satellites, nicknamed Tom and Jerry, that are especially sensitive to the tug of gravity from below.
This joint mission between NASA and the German Aerospace Center called the Gravity Recovery and Climate Experiment, or GRACE has been creating monthly snapshots of global groundwater since 2002. The trends now identified in this data help fill in monitoring gaps and confirm problems in places where official groundwater information is unreliable or nonexistent.
"GRACE is very good for areas of the world where we don't have good ground observations," says Marc Bierkens, a hydrologist who studies groundwater at Utrecht University in the Netherlands.
China, for example, has been shown to underestimate groundwater use. The country lacks the nationwide network of monitoring wells found in the United States. GRACE's measurements suggest that water levels have been dropping six or seven centimeters per year beneath plains in the northeast.
In some areas, short-term climate variability may be to blame. For example, the plains of Patagonia in Argentina and areas across the southeastern United States areas that have been hit hard by droughts store less groundwater today than they did in 2002.
But there's little doubt as to what's behind the biggest drops: farming. An agricultural boom in northern India has helped to squeeze nearly 18 cubic kilometers of water from the ground every year (SN: 9/12/09, p. 5). That's enough water to fill more than seven million Olympic swimming pools. And in California's Central Valley, which supports about one-sixth of the nation's irrigated land, the ground has been sinking for decades as landowners drill more wells and pull out almost 4 cubic kilometers of water per year (SN: 1/16/10, p. 14).
"People are using groundwater faster than it can be naturally recharged," says Matthew Rodell, a hydrologist and GRACE team member at NASA's Goddard Space Flight Center in Greenbelt, Md.
Agricultural pressures are particularly worrisome in places like the Middle East, another hotspot on the new GRACE map. Water pumped out of the Arabian aquifer beneath Saudi Arabia and surrounding countries today fell as rain thousands of years ago. Once this fossil water disappears, there's little new rainfall to replenish it.
Climate change will only worsen the problem, says Famiglietti. Precipitation patterns are becoming more extreme, increasing the severity of droughts. Wet areas are also becoming wetter and dry areas drier, which may accelerate declines in groundwater in some places over the coming years.
But even as the researchers sound the alarm, they don't know how loud to crank up the volume. GRACE reveals only changes in groundwater. It doesn't divulge how much water is left.
"We don't really know how stressed the world's largest aquifers are," says Sasha Richey of the University of California Center for Hydrologic Modeling.
Some reservoirs, like the giant Nubian Aquifer that underlies North Africa, may be large enough to meet demand for centuries. But few reliable estimates exist of the amount of groundwater stored in the world's aquifers.
Despite the uncertainties, Leonard Konikow, a hydrogeologist at the U.S. Geological Survey in Reston, Va., says that water use has become unsustainable in many places. Better irrigation systems that use less water could help to curb the problem, he says. So could channeling water during especially wet periods into aquifers instead of letting it run off into the ocean.
"There are too many areas in the world where groundwater development far exceeds a sustainable level," says Konikow. "Something will have to change."