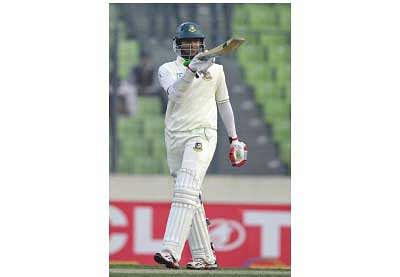 Shakib Al Hasan received another feather on his impressive cap as the former Bangladesh captain became the number one ranked all-rounder in the ICC Test player rankings.
It was a double delight for the 24-year-old who also holds the number one position in the ODI rankings.
Nothing could have been better than the way the prolific all-rounder signed off the year, and the usually reserved man was also delighted by the achievement.
“Without any doubt it's great news for me and for the country's cricket and I'm really happy. I have had the self-belief that it will come my way sooner or later because you know for a long time I was in the top five, so it was a matter of time,” said Shakib in his instant reaction.
The laurel came his way for the first time in his career through his splendid all-round performance against Pakistan in the second Test match at the Sher-e-Bangla National Stadium in Mirpur.
Shakib became the first Bangladesh player to hit a century and take a five-for in the same Test when he slammed 144 before falling victim to a run-out and added a haul of 6-82 in Pakistan's first innings. It was the first instance of a player scoring a hundred and taking a 6-for in the same Test since Pakistan legend Imran Khan did it in 1983.
“It's fantastic that the performance in the last Test in the year helped me to achieve this feat but it would be much better if we could manage a good result from the last Test match. We could have celebrated this success in great fashion if we had a good result under our belt,” opined Shakib.
The staggering performance in the Mirpur Test, which Bangladesh lost by seven wickets, not only earned the Magura lad the man-of-the-match award but also elevated him four places in the all-rounders' rankings, placing him at the top of the tree.
Shakib, who has also improved his bowling and batting rankings, gathered 404 points while South African all-rounder Jacques Kallis followed him with 397 points. In the Reliance ICC Player Rankings for Test batsmen, Shakib vaulted seven places to claim a career-best 31st position while in the bowling chart he climbed two spots to claim seventh position.
It's not any easy task for any player to bracket himself among the top-ranked players in the world when his team has such a poor record in the international circuit, but the ever-confident Shakib said that he follows one simple mantra: try to give your best regardless of what others are doing.
“I always try to give my best, which is the only motivation behind my success. We have a lot of scope to improve as a team and I believe it can only happen if every individual gives his best and always tries to improve his performance. Actually I'm not thinking too much and trying to take everything in my stride,” said Shakib when asked about how he stays motivated when his team loses one match after another.
Undoubtedly, losing the captaincy after a disastrous Zimbabwe tour was the low point this year for the impressive performer but the man himself was hardly bothered about the captaincy.
“Believe me, it only matters whether I am playing for my country or not. I am not thinking about additional duties. And once again I want to say that I take everything easily, which I think is the strength of my character,” said Shakib, who thanked everybody from the ball-boys to his teammates for his success at the international level.
Shakib however was worried about the long breaks in Test cricket which he thinks might hinder the Tigers' progress in the longer-version of the game. Bangladesh may play their next Test in April in Pakistan if the security team gives the green signal; otherwise they have to wait for the Zimbabwe tour in August next year.
“Actually it's one of the big reasons we are not progressing in Test cricket as per our expectations. We have to take this issue seriously because you have to start almost from the beginning if you play Test cricket after such a long break. You see we have had good progress in Test cricket when we played it on a regular basis,” Shakib lamented over the long gaps between Test series, like the fourteen-month one after which they played against Zimbabwe recently.