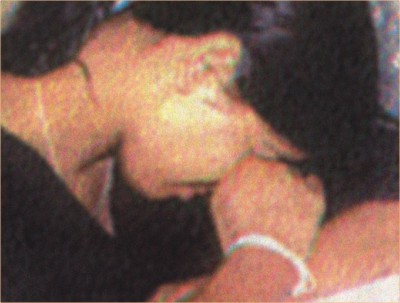 This photo shows Purnima weeping as she tries to narrate her ordeal in a press briefing after she was gang-rapped on October 8, 2001. The state minister for home yesterday said out of 5,571 complaints of post-polls violence after the 2001 elections, only the rapists of Purnima were sentenced. Purnima agreed to have her name and photo go in the media. Photo: Courtesy

A judicial probe commission has found the involvement of 26,352 people, including 25 ministers and lawmakers of the previous BNP-Jamaat alliance government, in the 2001 post-polls violence.
The government will file cases against the alleged perpetrators if the victims are still afraid to file lawsuits against them for fear of reprisal, Home Minister Sahara Khatun told reporters at her secretariat office yesterday, seven months after the commission submitted its report to her on April 24.
She said there had been more than 18,000 incidents of major crimes, including murder, rape, arson and looting by cadres of the then ruling BNP-Jamaat alliance in the 15 months following October 2001.
Sahara said of the 5,571 complaints lodged with the commission, 3,625 complaints of major offences had been probed.
Sources in the commission said of those, 355 incidents involved political murders while 3,270 involved rape, arson, looting and other crimes.
The alleged perpetrators of the crimes include former ministers Ruhul Quddus Talukder Dulu, Abdus Salam Pintu, Matiur Rahman Nizami, Altaf Hossain Chowdhury, Tariqul Islam and Maj (retd) Hafiz Uddin Ahmed, and former lawmakers of the BNP and Jamaat.
Sahara said the government would help victims file lawsuits against people alleged to have been involved in the crimes, but if the victims were afraid to file the cases, the government would on its own do the job.
Since the commission in its report mentioned that many victims had sought financial help from it, the government would help them financially according to its capacity, she said.
The commission members visited the spots where the atrocities allegedly occurred, took photographs and collected evidence, along with details of the alleged perpetrators and their victims.
State Minister for Home Shamsul Haque Tuku told the press briefing that none but the rapists of Purnima Rani Shil, a schoolgirl in Sirajganj, had been put behind bars this year. They all had links to the post-polls violence.
According to the prosecution, the 11 convicts forcibly took Purnima Rani Shil to a lonely place and gang-raped her on October 8, 2001.
The criminals also beat up Purnima's family members for protesting the incident.
Later, Nirmul Committee, a rights body, took her to Dhaka and held a press conference on October 20, 2001 seeking exemplary punishment for the rapists.
Purnima's mother Basona Rani Shil told the press that the crime was committed by local gangsters of the BNP on October 8, 2001.
Purnima is one of nearly 200 women from the minority Hindu community who were allegedly gang-raped by the cadres of the then ruling BNP-Jamaat alliance over a period of 15 months.
The Daily Star, it may be noted, had run a series of reports on the post-polls violence.
Tuku said the culprits subjected these people to torture, considering them to be loyal to the Awami League.
Citing a few incidents, Tuku said Rojua, a minor girl in Bagmara, Rajshahi, was kidnapped and raped because her brother was an Awami League activist.
He also mentioned the gang-rape of Jyotsna, a minor girl in Gaffargaon, whose family members were AL activists.
Talking about several incidents of post-polls violence in Bhola, commission sources in April told The Daily Star that former water resources minister Maj (retd) Hafiz Uddin Ahmed and his men had picked up one of their rivals and shot him dead after the 2001 polls.
In another incident, Hafiz and his men forced another of his rivals to strip naked and walk through a local market.
Hafiz, however, refuted the allegations and challenged the commission's findings.
Former home minister Altaf Hossain Chowdhury, one of the alleged perpetrators of the violence which occurred after the October 2001 elections, told The Daily Star last night, “The so-called probe report is nothing but an attempt to malign my character.”
“The report is politically motivated and concocted.”
“What they have mentioned about me in the report is a blatant lie. The Awami League had appointed a partisan judge and persons loyal to the party to prepare a fictitious report against me and other BNP leaders in the name of investigation.”
Maj (retd) Hafiz Uddin echoed Altaf's views on the findings.
He, however, acknowledged that some incidents of torture on members of the Hindu community had happened in his constituency after the 2001 polls.
“I had helped the authorities concerned arrest the persecutors, and they are now in jail,” he said.
The High Court had directed the government to form a judicial probe commission following a writ petition filed on behalf of Human Rights and Peace for Bangladesh on May 6, 2009.
The three-member commission, headed by retired district judge Mohammad Sahabuddin, was formed on December 27, 2009 to probe the atrocities against members of minority communities and opposition parties after the 2001 election, which returned the BNP to power.
The victims of the crimes, their family members and witnesses gave depositions to the commission.
Sahara said the government had already taken an initiative to file cases against the alleged persecutors.