Polybags bounce back despite ban 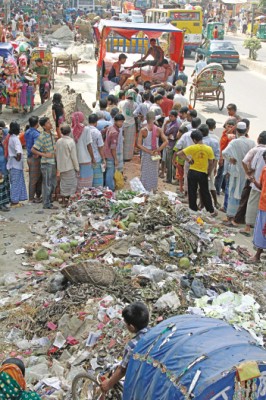 Garbage including polybags occupies a significant portion of the road causing suffering to its users at Madhya Badda in the city. The photo was taken yesterday. Photo: SK Enamul Huq

Polythene shopping bags that were banned a decade back have sneaked into the market over the years, posing a greater threat to the environment.
Environmentalists think the widespread use of polythene and plastic bags has turned out to be a grave concern as those are clogging the drainage system and choking the water bodies.
Paribesh Bachao Andolan Chairman Abu Naser Khan told the news agency that the use of polythene has become rampant not only in Bangladesh but also across the world, causing a serious harm to the environment and the biodiversity.
He said the government had imposed a ban on the use of manufacturing, selling and marketing of polythene bags over a decade ago, which was obviously a good initiative to protect the environment. But now, polythene is being used all over the country for lack of monitoring.
The environmentalist said the government should announce a “complete policy” and enact a “complete law” to check the use of all kinds polythene products and plastic goods, considering their adverse effects.
Naser Khan suggested introducing green products to replace the polythene shopping bags.
“Yes, the use of polythene shopping bags has marked an alarming rise despite a ban on it and it should be stopped,” said Bangladesh Environmental Lawyers' Association official advocate Anwarul Islam Chowdhury.
He said the law-enforcement agencies and officials of the Department of Environment (DoE) are not playing their due role in stopping the use of this hazardous polythene bags.
Almost all products, including food items, are packed in polythene bags the bulk of which finds its way into drains and water bodies. Used polythene bags are seen everywhere on the roads and in areas near canals as people are using those without restraint.
During the rainy season, the problem gets worse as polythene and plastic products block the drainage system, causing water logging.
Nurul Amin, a retired civil servant, says, “Had there been a nonstop campaign about the hazards of polythene bags and their adverse impacts on the environment, people themselves would have stopped using those.”
The government in 2001 slapped an outright ban on all polythene bags after they were found to have been the main reason during the 1988 and 1998 floods that submerged two-thirds of the country.
Asked about the problem, State Minister for Environment and Forests Hasan Mahmud said, “Drives are on against poly-bag production. But the law-enforcement agencies will have to play a more proactive role in this regard.”
He, however, said polythene bags are now mostly used in packing dry food items like Chanachur, biscuits and other items. “The government is sincere to stop the use of polythene bags,” he said.
On September 6, Hasan Mahmud directed the Department of Environment (DoE) to strengthen its anti-poly-bag drive to help minimise the environmental degradation.
He made the directive when DoE Director General Monwar Islam met him at his ministry office on the day. But his directive seems to have fallen into the deaf ears.
According to official data, the previous BNP-Jamaat government had conducted anti-polythene drive for just 75 days during its 2002-2006 term and realised only Tk 10 lakh.
The present government has so far conducted anti-polythene drives for 221 days from January 2009 to July 2011 and realised Tk 70.40 lakh in fine and seized around 136,587 kg of polythene.